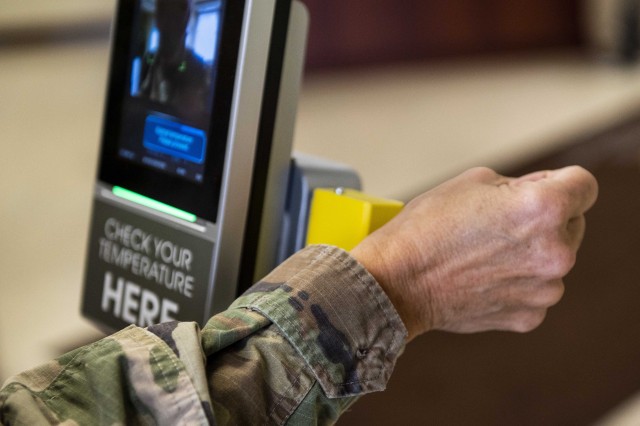 OCTOBER 20, 2020 – The U.S. Army Reserve is about people first, but sometimes it’s better to let a machine do the job especially during a time of social distancing.

This is what precisely happened when help arrived in the size of a mini-tablet. The terminal scans any soldiers’ or civilians’ temperatures via the wrist. It also photographs their faces as they enter Marshall Hall, the headquarters building for both the U.S. Army Reserve Command and the U.S. Forces Command, Fort Bragg, North Carolina.

“We wanted people to feel safe when they came back to work, and also to see that products were being installed that would help them keep their distance,” Charles “Tony” Jones, the facility manager for the dual-headquartered building, said.

A major benefit of this terminal is that it doesn’t require any touching, he said. The device is officially called a “Single Person Thermal Wrist Temperature Detection and Face Recognition Terminal.”

This tablet-like terminal has a camera and a thermal scanner. It sits on a stand that elevates it from the ground at around chest-level. As people enter the building, they lean over to photograph their faces. It takes a fraction of a second for the camera to take each photo.

“Please wear your mask,” a voice from the kiosk tells employees if it recognizes that their faces aren’t covered.

Then, the kiosk directs people to bring their wrist up, a few inches away from a side scanner that checks their body temperature.

A study conducted by medRx concluded that “wrist measurement is more stable than forehead measurement under different circumstances. Both measurements have great fever screening abilities for indoor patients.”

The kiosk includes a memory card — accessible only through a key — that stores up to 10,000 photos.

“We wanted to come up with a way that would take a picture for traceability,” Jones said.

That means even if someone enters the building with a normal temperature but later tests positive for COVID-19, the photo archive can help determine who came into the building around the same time, which can assist with contact tracing. Specifications on the device advertise it has a 90% facial recognition accuracy rate with a mask and -99% without.

If the kiosk detects a high temperature — which can be adjusted and set to any degree — an alarm will alert the security guards on site.

Security will then instruct the person who screened with a fever on what to do, including not being permitted into the building and seeking further medical screening.

“We re-check [the temperature] to make sure that everything’s working right, [but] the alarm will go off if your temperature is above the set mark,” Jones said.

Historically, 20,000 security card swipes take place each week from people entering the Marshall Hall building using various entrances, whether coming into work for the first time in the morning or returning from lunch or another appointment. That number dropped significantly to less than 8,000 weekly swipes when staff began teleworking due to COVID-19.

Still, every person who enters Marshall Hall must have their temperature checked in the morning. The terminals aren’t fully implemented yet; but once they are, they will reduce the need for soldiers posted at each entrance scanning temperatures with a hand-held thermometer, letting them devote more time to their daily taskings.

Currently, only one building entrance has the terminal installed. As Marshall Hall shifts to include terminals at every entrance, soldiers will remain assigned to each entrance until the staff gets adjusted to these new screening devices. As the device becomes part of the new normal, the soldiers will be slowly phased out of the temperature scanning process.

“The first day we put this out, the soldiers loved it,” Jones, who is looking forward to seeing every entrance implement the scanner, said.

All soldiers and civilians entering the building are still required to self-monitor for other symptoms each day before reporting for work.