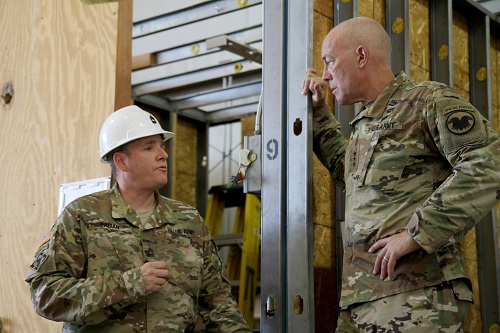 DECEMBER 13, 2016, WASHINGTON (Army News Service), By David Vergun – An Army Reserve G-3/5/7 study of the force called “Ready Force,” is taking a hard look at how well postured the Reserve is to support the Army against quick-striking, near-peer adversaries in full-spectrum operations.

Lt. Gen. Charles D. Luckey said he and his staff are eagerly awaiting the analytics from that study and plan to use them to determine the path forward. He didn’t give a date when the report would be released, but termed it “a journey of discovery.”

The Reserve has done an outstanding job over the last 15 years in operating as part of the total force against asymmetric threats in Iraq and Afghanistan, Luckey said, but now is the time to reconsider its structure and capabilities.

Luckey is the chief of Army Reserve and commanding general, U.S. Army Reserve Command. He spoke at a Defense Writers Group breakfast here Monday. The study is examining a number of different factors, he said, including amount and type of training for units.

The notion that more training is always better does not necessarily apply across the board, he said. For some units like engineers, additional training days may prove fruitful, but for others such as a chaplain ministry team detachment, less so.

The key to readiness — one that the study aims to understand — is striking the proper balance between training and the adverse impacts that increased training may have on the Soldier’s civilian career, he noted.

Luckey said he’s “guarded” against simply adding training days to the calendar without evidence for a clear benefit for readiness, as weighed against the potential impact such training could have on the Soldiers’ performance at their civilian jobs.

The study also is examining Reserve force structure, including the locations of Reserve training centers, especially in relation to pockets of industry that are vital to the Army’s needs, he said.

For example, one could make the case that locating a Reserve center at Barstow, California, near the National Training Center at Fort Irwin, could boost readiness because reservists could more easily access the training there, but it would be less than an ideal location because the civilian jobs are not there, he said.

Among the most important of study’s results, Luckey said, will the determination of how quickly forces essential to full-spectrum operations can respond. During the last 15 years, Reserve forces knew well in advance when their rotations would occur. Looking ahead, the Reserve must be able to respond more quickly, within a period of 60 to 90 days, or even fewer, he said.

Ideally, the Reserve would be prepared to bring full capabilities to bear on day one of a theater opening, he said, adding that he plans to convene a meeting with his commanders soon to discuss this topic.

The study will also examine equipment, modernization and manning and how well the Reserve is structured for decisive-action campaigns in tandem with the active force and National Guard.

Over the last 15 years, the Reserve has worked side-by-side with the other components, Luckey said. That relationship has benefited the Army greatly, and it would be a shame to lose it.

Opportunities to work alongside the active force and the Guard should be sought whenever feasible, he said, and they are. The three components are doing just that, he noted, at Fort Campbell, Kentucky, and at other locations, particularly with First Army and U.S. Army Training and Doctrine Command.