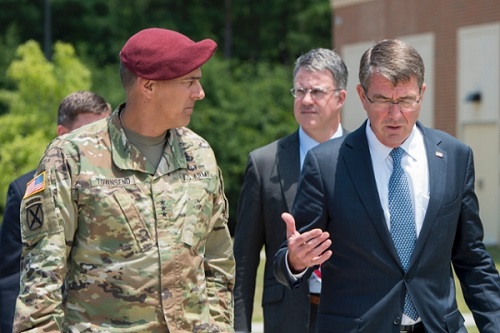 Army Gen. Joseph L. Votel, U.S. Central Command’s commanding general, presided over the ceremony in which command was transferred to Townsend from Army Lt. Gen. Sean MacFarland, the commander of III Armored Corps based at Fort Hood, Texas. The ceremony was attended by hundreds of U.S. and coalition soldiers, sailors, airmen and marines.

Votel expressed confidence in the team from Fort Bragg to continue pressuring the Islamic State of Iraq and the Levant.

“We are very fortunate to be welcoming another great team in Lt. Gen. Steve Townsend and Command Sgt. Maj. Benjamin Jones,” Votel said. “The XVIII Airborne Corps has very big shoes to fill, but I know they are up to the task and raring to go!”

Over the last several months, officials said, soldiers from the XVIII Airborne Corps have conducted intense training to prepare for the mission.

In his remarks, Townsend highlighted the progress already accomplished in the region.

“Over the past year, CJTF-OIR, led by my good friend Lt. Gen. Sean MacFarland and his III Armored Corps, and our coalition and regional partners, have done incredible work to degrade and dismantle ISIL’s oppressive and brutal regime,” Townsend said.

“Their combined efforts on the ground and in the air have accelerated” the counter-ISIL campaign, Townsend said, pushing ISIL back across the battlefield and achieving remarkable momentum toward ISIL’s ultimate defeat.

Key accomplishments achieved during the III Armored Corps tour include:

— The training of more than 13,500 members of the Iraqi security forces, including more than 4,000 Iraqi soldiers, 1,500 counter-terrorism service soldiers, 6,000 Peshmerga, andalmost 1,000 federal police and 300 border guards.

— An increased emphasis on police training and the recruitment of tribal forces, adding 5,000 trained local police and over 20,000 tribal fighters enrolled.

— About 50,000 counter-ISIL sorties conducted in the past year, during which more than 30,000 munitions were dropped on the enemy, approximately two-thirds of them in Iraq and about one-third in Syria.

— More than 200 strikes conducted against oil and natural gas activities of the enemy, which reduced the enemy’s oil revenue stream by approximately 50 percent.

— Vigorous attacks on the enemy leadership and command-and-control and weapons manufacturing capability, including attacks on more than 25 bulk cash storage sites, resulting in at least half-a-billion dollars destroyed.

Townsend shared his vision for the CJTF-OIR mission ahead.

“Let me say for all to hear — friend and foe alike — we will continue the attack against ISIL, and we will defeat them in Iraq and Syria on our watch,” Townsend said.

The XVIII Airborne Corps most recently returned from a December 2014 deployment to Afghanistan, where it led the NATO operational headquarters in Kabul, the International Security Assistance Force Joint Command.