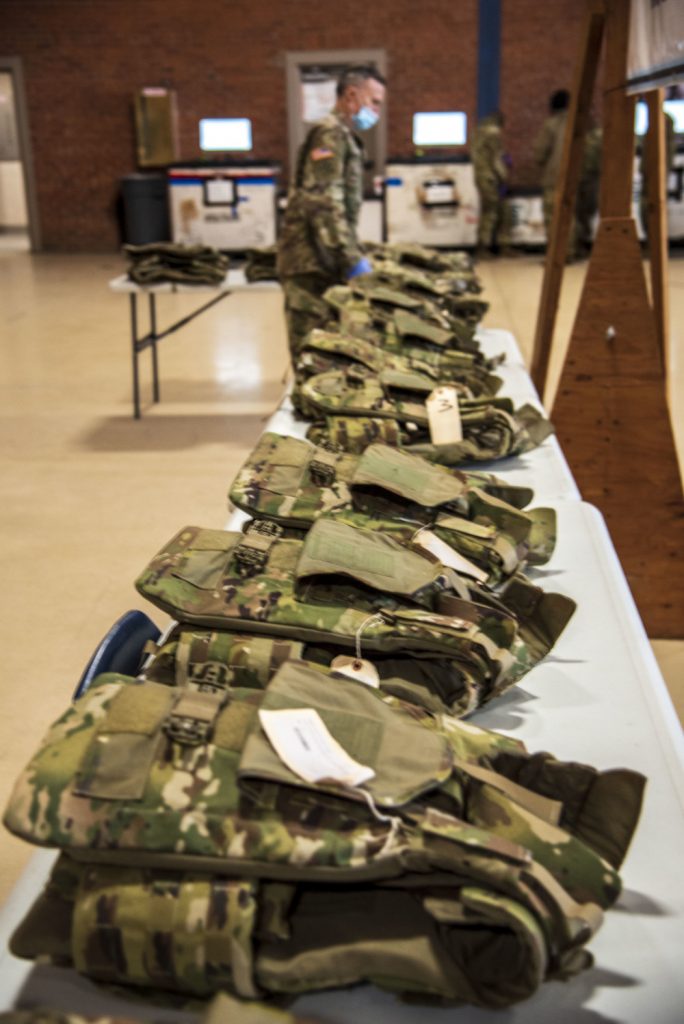 Researchers at the U.S. Army’s Institute for Soldier Nanotechnologies at the Massachusetts Institute of Technology, Caltech and ETH Zürich found that materials formed from precisely patterned nanoscale trusses are tougher than Kevlar and steel.

“Increasing protection while simultaneously decreasing the weight that soldiers carry is an overreaching theme in our research,” said Dr. James Burgess, ISN program manager for the U.S. Army Combat Capabilities Development Command, known as DEVCOM, Army Research Laboratory. “This project is a really good example of such efforts where projectile energy absorption is nanostructured mechanism based.”

The research, published in Nature Materials, found that the material prevented the projectiles from tearing through it.

“The same amount of mass of our material would be much more efficient at stopping a projectile than the same amount of mass of Kevlar,” said Dr. Carlos Portela, assistant professor of mechanical engineering at MIT, the study’s lead author.
The researchers calculate that the new material absorbs impacts more efficiently than steel, Kevlar, aluminum and other impact-resistant materials of comparable weight.

“The knowledge from this work…could provide design principles for ultra-lightweight impact resistant materials [for use in] efficient armor materials, protective coatings, and blast-resistant shields desirable in defense and space applications,” said co-author Dr. Julia R. Greer, a professor of materials science, mechanics, and medical engineering at Caltech, whose lab fabricated the material.

Nanoarchitected materials are known to feature impressive properties like exceptional lightness and resilience; however, until now, the potential for additional applications has largely been untested.

“We only know about its response in a slow-deformation regime, whereas a lot of their practical use is hypothesized to be in real-world applications where nothing deforms slowly,” Portela said.

To help fill this vital knowledge gap, the research team set out to study nanoarchitected materials undergoing fast deformation, such as that caused by high-velocity impacts. At Caltech, researchers first fabricated a repeating pattern known as a tetrakaidecahedron—a lattice configuration composed of microscopic struts—using two-photo lithography, a technique that uses a high-powered laser to solidify microscopic structures in photosensitive resin.

To test the tetrakaidecahedron’s resilience to extreme, rapid deformation, the team performed experiments at MIT using the ISN-developed laser-induced particle impact array. This device aims an ultrafast laser through a glass slide.. As the laser passes through the slide, it generates a plasma, an immediate expansion of gas that launches the particles toward the target.

By adjusting the laser’s power to control the speed of the microparticle projectiles, the researchers tested microparticle velocities within the supersonic range.

“Some experiments achieved twice the speed of sound, easily,” Portela said.
Using a high-speed camera, the researchers captured videos of the microparticles impacting the nanoarchitected material. They had fabricated material of two different densities. A comparison of the two materials’ impact response, found the denser one to be more resilient, and microparticles tended to embed in the material rather than tear through it.

To get a closer look, the researchers carefully sliced through the embedded microparticles and nanarchitectured target. They found that the struts below the embedded particle had crumpled and compacted in response to the impact, but the surrounding struts remained intact.

“We show the material can absorb a lot of energy because of this shock compaction mechanism of struts at the nanoscale, versus something that’s fully dense and monolithic, not nanoarchitected,” Portela said.

Going forward, Portela plans to explore various nanostructured configurations other than carbon, and ways to scale up the production of these nanostructures, all with the goal of designing tougher, lighter materials.

“Nanoarchitected materials truly are promising as impact-mitigating materials,” Portela said. “There’s a lot we don’t know about them yet, and we’re starting this path to answering these questions and opening the door to their widespread applications.”

The U.S. Army established the MIT Institute for Nanotechnologies in 2002 as an interdisciplinary research center to dramatically improve the protection, survivability and mission capabilities of the Soldier and of Soldier-supporting platforms and systems.

In addition to Army funding through the institute, the U.S. Office of Naval Research and the Vannevar Bush Faculty Fellowship supported the research.

As the Army’s national research laboratory, ARL is operationalizing science to achieve transformational overmatch. Through collaboration across the command’s core technical competencies, DEVCOM leads in the discovery, development and delivery of the technology-based capabilities required to make Soldiers more successful at winning the nation’s wars and come home safely. DEVCOM Army Research Laboratory is an element of the U.S. Army Combat Capabilities Development Command. DEVCOM is a major subordinate command of the Army Futures Command.