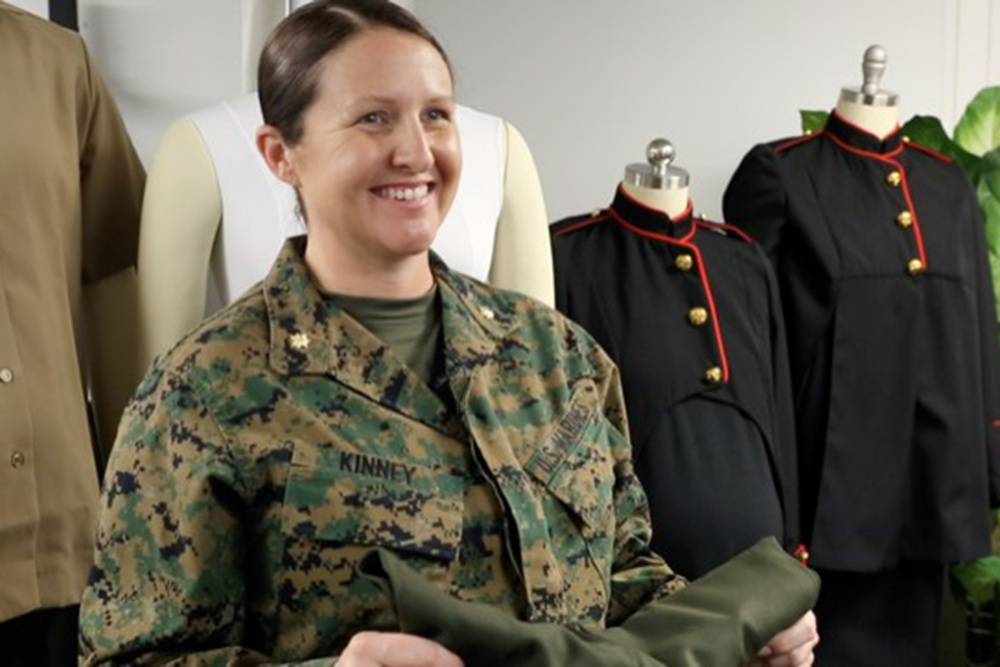 APRIL 7, 2021 – The Marine Corps is improving many facets of maternity uniforms to meet the needs of all Marines.

The efforts include improvements to existing uniforms and the development of new clothing items. The enhanced maternity uniforms incorporate clothing attributes reflective of innovative commercial industry technology in design and fabric development.

This multiphase project exemplifies the Marine Corps’ investment in equipping Marines with comfortable, effective clothing as well as their dedication to supporting the recruitment and retention of Marines—an objective featured in 38th Commandant of the Marine Corps Gen. David Berger’s Commandant’s Planning Guidance.

“The population of expectant Marines may be small,” said Lucinda Stocks, a program analyst with MCSC’s Program Manager Infantry Combat Equipment. “But developing these maternity uniforms is important for the future of the Marine Corps.”

The Concerns
In 2019, Maj. Desiree Sanchez learned she was pregnant with her first child.

After the jubilation of the exciting news subsided, her mind immediately shifted to work uniform requirements. As the aide-de-camp for the assistant commandant of the Marine Corps, Sanchez was tasked with matching her uniform with his.

However, the Marine Corps did not have in their inventory properly fitted dress blues for the later stages of pregnancy.

“I remember an event where we had to be in our dress blues and I couldn’t fit in that uniform,” said Sanchez, now the associate director for the Stockdale Center for Ethical Leadership at the U.S. Naval Academy.

Sanchez’s worries mirrored those of other female servicewomen nationwide and began to spread throughout the Department of Defense. In response, the Defense Advisory Committee on Women in the Services met in September 2019 to discuss issues with these uniforms.

DACOWITS comprises a group of civilian men and women appointed by the Secretary of Defense who meet regularly to provide advice and recommendations on matters and policies involving the recruitment, retention, employment, integration, well-being and treatment of servicewomen.

“DACOWITS wrote a paper that went to Congress and each individual leader of the services chimed in,” said Miguel Reis, the uniform certification analyst at MCSC. “Then, in 2019, we had a meeting with the [assistant commandant of the Marine Corps], which led to the initiation of these efforts.”

After receiving feedback from the ACMC and the Marine Corps Uniform Board in October 2019, MCSC acted on resolving these concerns. In June 2020, the commandant formally approved modifications to the Marine Corps’ maternity uniforms.

“Once we received the requirement, we started looking at what we could do immediately, mid-term and long-term to meet the needs of that population,” said Emily Madden, a U.S. Army’s Combat Capabilities Development Command Soldier Center clothing designer supporting PM ICE. “We were determined to consider all concerns and provide an updated, improved set of maternity items.”

The Solutions
Less than nine months after receiving the commandant’s approval, MCSC finalized the development of the upgraded maternity uniforms. The first series of items will be available for purchase this month.

MCSC added adjustable side tabs on the existing service uniform maternity tunic and maternity khaki shirts. The tabs added to the short- and long-sleeve shirt and tunic allow for growth while providing shape as the Marine progresses through pregnancy.

The tabs provide additional shape to the existing pleated design, providing the pregnant Marine the ability to adjust her shirt and tunic. These items will be available for purchase in April at Marine Corps Exchanges and other approved locations across the nation.

Maj. Calleen Kinney, who works in the Educational Wargaming department at Marine Corps University aboard Marine Corps Base Quantico, Virginia, evaluated the tunic in March 2021. Kinney was in the third trimester of her pregnancy during the assessment.

“I really like the addition of the tabs to the tunic because it makes the item more adjustable depending on where you are in your pregnancy,” said Kinney. “It is more fitted and more flattering in appearance than the previous version.”

New maternity and nursing undershirts are also scheduled to be available for purchase later this month. The maternity shirt includes a ruching element at the side seams, providing comfort, shape and ease of use during pregnancy.

“They can wear this maternity shirt variant under their utility uniform,” said Madden. “It gives Marines more room as they progress through the trimesters of pregnancy.”

The nursing shirt incorporates a cross-over design under a panel that allows for easy access for nursing or pumping.

“I think this nursing shirt is a great product,” said Maj. Elena N. Vallely, a team lead for Global Combat Support System-Marine Corps at MCSC, who assessed the item in March 2021. “As both a mother and Marine, I think it’s important for Marines to have options that enables them to both nurse and look professional while wearing the utility uniform.”

The maternity shirt will be part of the maternity clothing allowance while the nursing will be available for retail purchase. Both items can be worn under utility uniforms.

Marines maintain a routine PT regimen even during pregnancy. However, the current all-purpose trunk doesn’t have expandability as the midsection continues to grow. The new shorts offer this capability, providing fitted, comfortable shorts to meet PT needs.

The maternity general purpose trunk is in development. Certification is scheduled for the first quarter of FY22, with availability for purchase soon thereafter. Subsequently, PM ICE will certify an optional maternity version as part of the new Marine Corps Physical Training Uniform in 2022.

In 2022, Marines will also have the option to purchase a maternity dress blue skirt and sky-blue slack variant they can wear during ceremonial events. MCSC hopes to develop a dress blue coat for use at the Marine Corps Birthday Ball, but those talks remain preliminary.

Fitting ‘All Stages of Pregnancy’
The U.S. Air Force was one of the first services to begin the research and development of updated maternity uniforms. In 2019, MCSC began a partnership with the Air Force to gain information on certain design concepts and processes to support their own efforts.

Additionally, MCSC is working with the U.S. Army for synergies and commonalities to create economies of scale and minimize duplication. The command has also worked with the Navy on design concepts and fabrications, such as types of cloth.

“Working with other services presents a number of benefits, including the advantage of not having to start from scratch,” said Reis. “We were able to learn, share information and accelerate the process, which allows Marines to access these improved maternity items in a shorter timeframe.”

PM ICE’s team features several women who have firsthand experience expecting. These individuals understand and carefully consider the needs of female Marine, including the need to fit a wide range of body sizes.

MCSC has spent many hours researching and developing the modified and new maternity items, understanding the importance of intricate details, such as sizing and comfortability, to provide pregnant Marines with the best products available.

“The sizing options available should fit through all stages of pregnancy,” said Madden, who recently discussed these benefits with other PM ICE representatives on a Marine-centric podcast.

Sanchez said providing female Marines with additional, comfortable options shows a willingness from Marine Corps leadership to support the needs of all Marines. She commended the MCSC for addressing concerns about maternity uniforms in an accelerated and deliberate manner.

“I am so excited and grateful for these new and updated maternity items,” said Sanchez. “It goes to show that our leadership really does care about all Marines.”