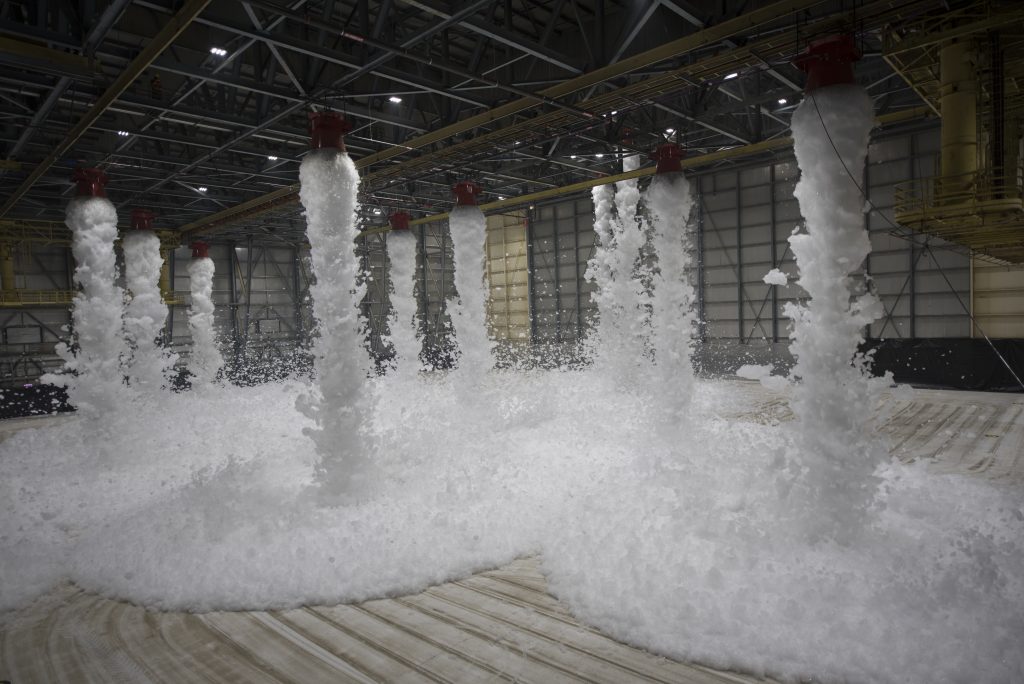 SEPTEMBER 28, 2020 – An alarm system echoes throughout a hangar — blaring one last wail before foam begins falling from the ceiling like a collection of waterfalls made of bubbles.

Mere minutes later, the 77,000-square-foot hangar, which is about 20,000 square feet larger than a professional football field, is filled to the brim with foam.

Hangar 811 normally serves as a place for aircraft cleaning and maintenance for Travis’ fleet, which is valued at more than $7 trillion.

“After almost two years of refurbishing hangar 811, installing this fire suppression system was the last step we needed before we could get the hangar back from contracting,” said Master Sgt. David Ellestad, 60th Maintenance Group hangar manager. “The first steps we took were to fix up floors and replace the lights in the hangar.”

Ellestad said, the floors and lights of the hangar received repairs between January 2019 and June 2020

“The hangar floor needed to be repaved, sanded and painted white,” said Ellestad. “We had to sand down the ground to combat how slippery the floors got when covered in soap and water. We also replaced the lights with LED’s to reflect more light off the white paint.”

During the down time, Travis lost its only hangar for washing aircraft. Ellestad and his Airmen had to improvise to get the job done. If aircraft are not cleaned regularly, they will inevitably build up corrosion, making them unable to fly.

“We set up a temporary aircraft washing location at Hangar 818 while Hangar 811 was being refurbished,” said Ellestad. “We needed to buy portable aircraft scale wash systems and set up a frac tank, basically a container to catch all the soap and grime from the aircraft, to meet environmental standards.”

With the hanger flooring and lights in place, it was time to put in the new fire suppression system.

“The old fire suppression needed to be replaced because along with eliminating the fire it would also damage our aircraft,” said Staff Sgt. Jordon Ward, 60th Civil Engineer Squadron construction manager. “The foam system replacing the AFFF is called high expansion foam, and not only does it stop fires and preserve our aircraft, but it’s also much more eco-friendly.”

“This foam is made up of many different chemicals mixed together; it’s kind of like soap,” said Ward. “And, like soap it expands; however, this foam is called high expansion foam; it’s able to expand up to 200 percent or more than the liquid it starts as.”

For a fire to survive it needs a fuel source, heat, and oxygen. The moment one of these elements are removed, a fire will inevitably fizzle out.

“We don’t use normal water suppression systems in hangars because they wouldn’t work for grease fires, and it would damage all the electrical equipment,” said Ellestad. “This is why we use the new foam system because it’s able to smother fires, taking away the oxygen from whatever it’s touching and reduces the heat, while not damaging the aircraft.”

The foam may be effective at putting out fires, but it can be very hazardous if not taken seriously.

“This foam is only dangerous if you get covered by it because one of its core functions is to absorb oxygen,” said Ward. “Losing your spatial awareness is also a threat. When you hear the emergency alarm, go for the nearest exit and evacuate.”

Now that the new fire suppression system is installed and tested, Travis is only one inspection away from reopening Hangar 811.