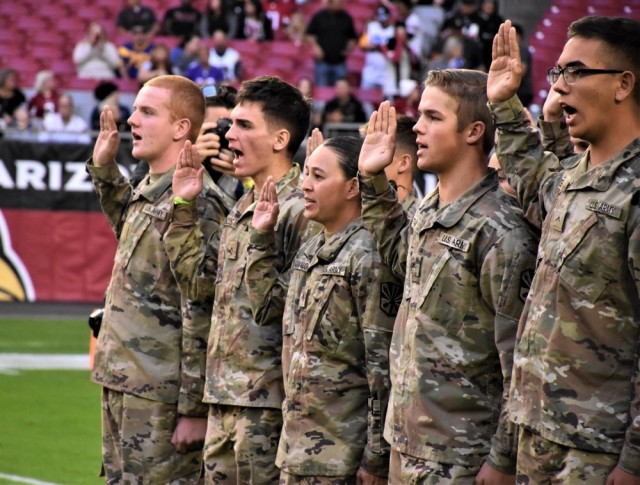 JANUARY 2, 2020 – A new military entrance exam is now being given to Army recruits to predict performance, behaviors, attitude, and attrition of potential Soldiers. The pilot program is designed to see how the Army can get best-fit recruits, even in jobs that require slightly higher standardized test scores than the applicant achieved.

The three-year pilot study authorized by the Department of Defense is for a talent management tool known as the Tailored Adaptive Personality Assessment System, or TAPAS.

The TAPAS accession pilot will evaluate the use of personality testing to supplement the Armed Forces Qualification Test, known as the AFQT, or Armed Services Vocational Aptitude Battery, known as ASVAB.

TAPAS will “synchronize ways to improve all aspects of developing and maintaining the force at the individual Soldier level,” said Tonia Heffner, selection and assignment research unit chief at the Army Research Institute for the Behavioral and Social Sciences.

The 120-question, non-cognitive test has actually been used on recruits in conjunction with other entrance exams, such as the AFQT, since 2009. However, then it was used to collect data on individuals already entering their military occupational specialties.

The TAPAS pilot expands on current screening tools — like the high school diploma, AFQT, and the Occupational Physical Assessment Test — by defining the quality a potential Soldier offers the Army, she explained.

While TAPAS is expected to expand the market of eligible recruits, Heffner said it will not compromise Army standards.

“Anyone who enlists must meet standards,” she said. “Those enlisting in this pilot that expands eligibility must still pass the ASVAB, the OPAT, pass a drug and alcohol screening test as well as a criminal background check before selecting one of the Army’s occupational specialties.”

In the past decade, Heffner and her team has compiled data from enlisted Soldiers using TAPAS. The results have consistently shown that individuals with higher motivation outperform what their below-average score indicates. They adapt better to the Army, and have less disciplinary incidents, Heffner said.

“Those who will enlist through the pilot program will be more qualified than what their cognitive test score says,” Heffner said. “I expect them to perform much higher than that. It’s not even a little bit, it’s noticeably higher than that. There will be lower attrition for the people in the pilot program and they will outperform many of their peers.

“This is increasing the overall quality of the Army,” she added.

Using this pilot, up to 6,000 applicants annually from the Army’s three components who score between a 45-49 on the AFQT and also score in the top 50% on the TAPAS test will be exempt from the AFQT grading scale. Whereas already fully qualified to enlist, this exempt population will be used to assess the effectiveness of TAPAS on new recruit screenings.

“If someone is within five points out of a 100-point scale [on their AFQT],” Heffner said, “we’re saying they scored just below, but because of their motivation, they’ll behave like someone who scores above.”

Allowing those who score in the top 50% of the TAPAS to enlist will help fill the Army with “high-quality, extremely-fit individuals who are capable of performing successfully as Soldiers,” Heffner said.

The Army has always competed against tough job markets without needing to lower standards, Heffner said, adding “this pilot simply offers more opportunities to qualified Americans willing to serve by taking into account other qualities beyond what a standardized education exam can identify.”