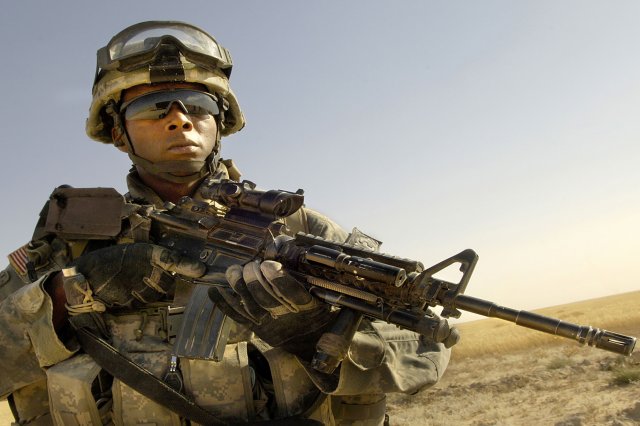 Deployed Soldiers have suffered severe damage to their eyes or lost their sight entirely.

“We have seen some really horrific injuries with roadside bombs,” said Whitehead, the product manager for protective equipment at Program Executive Office Soldier.

Using eyewear approved from the list, which features 27 products that have undergone extensive testing, could mean the difference between saving a Soldier’s vision or going blind, Whitehead said.

“The Soldier’s face is all chewed up,” Whitehead said. “But when they pull his glasses off, where the skin is intact around their eyes, where you know without a doubt that eyewear saved their eyes.”

The Army introduced a lens model on the APEL that adds a new capability to the Army’s Soldier Protection System: an advanced transition protective lenses. The Transition Combat Eye Protection, or TCEP lens, features sensors with a greater sensibility than traditional transitional lenses, responding to visible light instead of UV rays.

The transition happens in milliseconds allowing Soldiers to go from sunlight to indoors quickly without loss of their situational awareness to see incoming projectiles or enemy attacks instantly. Typically, commercial transition lenses can take up to 5-10 minutes to transition and adjust to changing light levels. Often they will not darken in bright sunlight if a Soldier sits inside of a Humvee. The TCEP lenses will.

“It’s a one-second button,” said Capt. Michael McCown, assistant product manager of head protection at PEO Soldier. “It’s not like your transition lenses that you get from your doctor that change as you go in and outdoors … it’s electronic.” It can also be set to transition automatically.

PEO Soldier also unveiled a cold-weather goggle that can resist fogging in colder conditions. The new capability could help Soldiers at cold-weather installations or troops taking part in winter operations.

Soldiers can access the Army’s APEL list online at https://www.peosoldier.army.mil/equipment/eyewear/. Each product on the APEL must meet the Military Performance Standard, titled Military Combat Eye Protection, or MCEP System. The APEL, updated about every two years, offers a wide range of brands and styles of protective sunglasses and goggles. Approved eyewear has an APEL logo and can be purchased online, and at post exchanges and AAFES stores.

PEO Soldier also took feedback directly from Soldiers, who responded in surveys, that having faster transition lens glasses along with high-quality sunglasses ranked atop their lists.

“They aren’t forced into a particular set of eyewear,” McCown said. “They’re able to choose which ones they want for their preferences.”

APEL-approved eyewear undergoes rigorous trials and a series of ballistic and non-ballistic testing at Aberdeen Proving Ground, Maryland, and at eyewear production facilities. Those tests include optical distortion, UV absorption and resistance to abrasion, and many more. The Army has placed a high priority on Soldier eyewear safety, bringing in ballistic experts and quality-assurance specialists to evaluate and witness the tests.

The Army requires each vendor to test their items every six months for conformance and have their items tested by a third-party laboratory every two years for recertification. Quality audits are also conducted annually at each facility to make sure they are in compliance with ISO 9001 – Quality management systems — and ISO 17025 — General requirements for the competence of testing and calibration laboratories.

McCown said Soldiers prioritize choice and style but he warns Soldiers and their commanders about the critical importance of APEL-approved eyewear. McCown cautions Soldiers only to trust products with the APEL-approved logo or to refer to the APEL list when choosing protective eyewear. Products with an APEL logo marked March 2019 or earlier remain valid and can still be used for ballistics fragmentation protection.

Whitehead added that the Army keeps the list at 27 to encourage competition among vendors to deliver higher quality protects, as well as keep prices affordable for Soldiers of each rank.

The APEL is a part of the Army’s Soldier Protection System, which guards Soldiers against threats using reduced-weight equipment in a modular, adjustable, next-generation protective system.