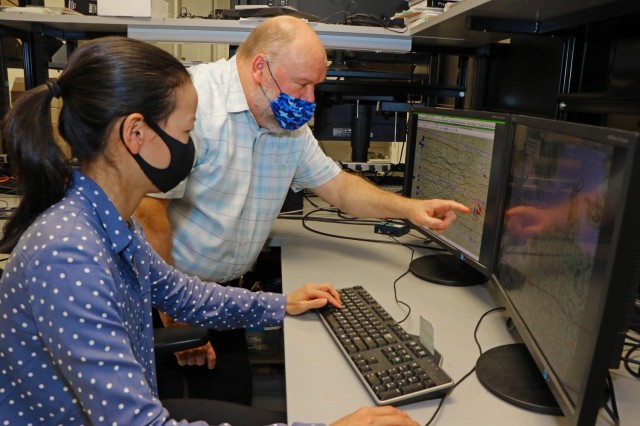 APRIL 28, 2021 – The Army is advancing modeling and simulation (M&S) software that will enable scientists and senior leaders to understand the effectiveness of emerging positioning, navigation and timing (PNT) technology on combat missions.

Army Futures Command is leading the five-year joint-service software development program, which started in 2017; analysts will use the software to model how PNT capabilities perform across air, sea and land.

“GPS is the DoD’s primary PNT source because it has great accuracy, but it’s vulnerable to being jammed, denied or degraded. As the Army continues advancing PNT sensor technologies to augment and complement GPS, modeling and simulation tools play an important role in the research process,” said Anni Woolley, a computer scientist within the Command, Control, Communications, Computers, Cyber, Intelligence, Surveillance and Reconnaissance (C5ISR) Center — a component of AFC’s Combat Capabilities Development Command.

The Army will be able to use the Multi-Domain Quantitative Decision Aid (MQDA) software to conduct PNT analysis in environments that cannot be executed easily in the real world. For example, researchers can simulate GPS jamming in any location and measure the impacts on a wide variety of combat scenarios, Woolley said.

At the completion of the project, the Army will be able to simulate how different PNT sensor packages “attached” to vehicles affect a unit’s mission performance for situational awareness, lethality, mobility, sustainability and protection.

“We can set up a force-on-force scenario fight, and place PNT systems on vehicles to see the mission outcome of the simulation,” said Gina Guiducci, chief of the Performance Analysis Branch. “Then we can quickly add a new sensor from a library of complementary systems and determine the impact to the mission.”

Depending on the types of missions, the resulting data could include fuel consumed, rounds fired, distance traveled, and enemy and friendly casualties. The goal is to determine how a new sensor will improve a Soldier’s ability to move, shoot and communicate, according to Guiducci.

Tools such as MQDA save time and money for the Army by providing early insight into the development process to make better informed fielding and science and technology (S&T) funding decisions, Woolley said. The software and analysis assists in prioritizing resources by testing promising combinations of PNT sensors first. This potentially eliminates the development of entire systems that may not be beneficial on the battlefield.

Modeling and simulation could also help determine which combination of vehicles and sensor packages will perform best during varying scenarios, according to Woolley.

“We want to resource the force smartly. M&S tools help the Army weigh the cost of development and integration of new S&T capabilities versus the promise for improvement in operational mission effectiveness. It helps determine the PNT performance capability required when fielding a force to overmatch the threat in a specific geographic region,” Woolley said.

The C5ISR Center team of scientists and engineers is planning the scope and objectives for a final capstone demonstration in September 2021. The software’s end users will be research and development laboratories and experimentation and analysis organizations within the Army, Navy and Air Force.

The C5ISR Center is the Army’s applied research and advanced technology development center for C5ISR capabilities. As the Army’s primary integrator of C5ISR technologies and systems, the center develops and matures capabilities that support all six Army modernization priorities, enabling information dominance and tactical overmatch for the joint warfighter.

The C5ISR Center is an element of the U.S. Army Combat Capabilities Development Command. Through collaboration across the command’s core technical competencies, DEVCOM leads in the discovery, development and delivery of the technology-based capabilities required to make Soldiers more lethal to win our nation’s wars and come home safely. DEVCOM is a major subordinate command of the U.S. Army Futures Command.