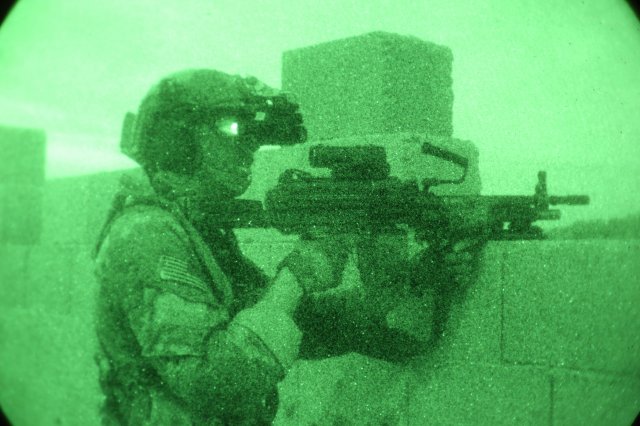 Dr. Kristan Gurton, an experimental physicist in the Computational and Information Sciences Directorate, and Dr. Sean Hu, an electronics engineer in the Sensors and Electron Devices Directorate, are leading this effort for the laboratory.

According to Gurton, all objects that have a non-zero temperature emit thermal radiation in the infrared portion of the spectrum, and the “intensity” of that radiation is proportional to its temperature.

The researchers said thermal radiation is always present in the environment regardless of whether it’s day or night, which is why the Army uses thermal cameras to “see” objects that are often hidden in the dark.

However, in addition to the “intensity” of the infrared light, there is another characteristic of light that is often ignored when it comes to imaging: polarization state.

“Researchers have known for about 30 years that man-made objects emit thermal radiation that is partially polarized, e.g., trucks, aircraft, buildings, vehicles, etc., and that natural objects like grass, soil, trees and bushes tend to emit thermal radiation that exhibits very little polarization,” Gurton said. “At ARL, we have been developing, with the help of the private sector, a special type of thermal camera that can record imagery that is based solely on the polarization state of the light rather than the intensity. This additional polarimetric information will allow Soldiers to see hidden objects that were previously not visible when using conventional thermal cameras.”

Gurton is pursuing the development of the camera hardware, while Hu is working on software designed to best exploit the additional information thermal polarimetric imaging provides.

“Soldier-specific applications that we have been investigating include the detection of hidden tripwires and booby traps, enhanced ability to see camouflaged targets, identification of buried line-mines and improvised explosive devices, and enhanced targeting and tracking of missiles, mortars, unmanned aerial vehicles and other airborne threats,” Gurton said.

The team’s most recent and exciting discovery involves the ability to detect and identify specific human subjects during complete darkness.

“Prior to our research at ARL, the only way to view humans at night was to use thermal imaging,” Gurton said. “Unfortunately, such imagery is plagued by a ‘ghosting’ effect in which detailed facial features required for human identification are lost. However, when polarization information is included in the thermal image, i.e., a thermal polarimetric image, fine facial details emerge, which allows facial recognition algorithms to be applied.”

Due to the technical difficulty in building thermal polarimetric camera systems, very little research had been conducted prior to Gurton and Hu’s involvement studying this novel phenomena starting in 2005.

“Our primary goal was to develop a new type of camera system that could detect objects that were difficult, or impossible, to see using current state-of-the-art thermal cameras,” Gurton said.

Gurton said that because this technology is so new, no commercial thermal polarimetric camera systems exist.

“We here at ARL are working with the private sector on a two-prong approach in which both research grade and ruggedized commercial grade polarimetric cameras are being developed,” Gurton said. “It’s our hope that in the future, all deployed Department of Defense thermal imaging systems will have a polarimetric ability that can be implemented with a simple press of a button.”

Earlier this year, ARL published work on similar research that focused on machine learning algorithms used to synthesize a more visible-like image. That research looked at these images as a way to facilitate the matching of visible watchlist imagery with conventional or polarimetric thermal imagery (see related links below). This work, focusing on new and emerging camera technologies like the polarimetric thermal cameras, introduces another way to bring greater visual technology to Soldiers in total darkness.