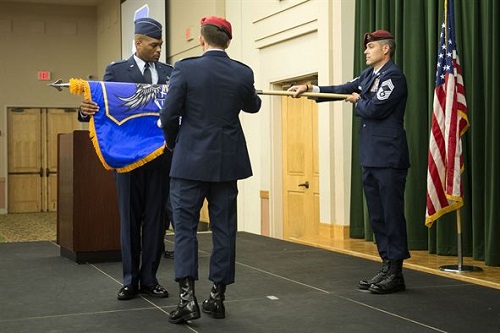 JUNE 6, 2016, JOINT BASE SAN ANTONIO-LACKLAND, Texas (AFNS) – For the first time in its history, the Air Force on June 2 activated a unit solely dedicated to train the service’s ground component at Joint Base San Antonio-Lackland.

The unit addresses the growing need for “fifth-generation warriors” who integrate air and ground operations on the joint battlefield.

“Our mission at the Battlefield Airmen Training Group is to select, train and mentor Airmen for global combat operations,” said Col. Ronald Stenger, the group’s inaugural commander and special tactics officer. “We will breed quiet professionals, infused with a warrior ethos and fueled by scholarship and innovation.”

The group’s leadership aims to improve processes and programs across five pillars: recruiting; manpower and leadership; equipment; infrastructure; and curriculum. The effort starts with successful leadership forging and developing Airmen for the battlefield, Stenger said.

The group, a subordinate unit of the 37th Training Wing, replaces the 342nd Training Squadron and will lead five new BA training squadrons set to be activated later this summer. The squadrons consolidate and organize already existing training courses under BA leadership. The units include three pipeline squadrons dedicated to each career field; one instructor qualification and prep course squadron including advanced employment training such as military free fall; and a support squadron.

Overall, the group is spread across eight geographically separated squadrons and detachments in seven states, including:

The activation of the group and the squadrons also aims to reduce costs and increase efficiencies across the pipeline to produce highly qualified battlefield Airmen. Now, trainees will permanently move from one unit to another as they complete training required by each individual squadron. Previously, a trainee would return to Joint Base San Antonio, which served as the hub between attending their lengthy schools. At any given time, there are between 1,000 and 1,500 Airmen in BA training; on average, only 20 percent of those trainees will graduate as a battlefield Airman.

“The Air Force is looking for special individuals to be part of our elite ground component as battlefield Airmen and special operators,” said Tech. Sgt. Mario Jaramillo, a top recruiter for battlefield Airmen in San Antonio. “We need confident, physically fit candidates who refuse to quit in the face of insurmountable challenge.”

Battlefield Airmen are the critical ground link between air assets and ground forces, according to Stenger. They are trained to operate as a ground component to solve ground problems with air power, often embedding with conventional and special operations forces. They also accomplish missions such as surveying a dry lake bed in Africa as an airfield, rescuing military personnel from behind enemy lines or calling in precision air strikes on enemies.

“This activation is more than an unfurling of a flag,” said Col. Roy Collins, the commander of the 37th Training Wing. “It serves as a notice to all who would do us harm that America is prepared to respond with highly trained, skilled warriors, always ready to answer their nation’s call.”