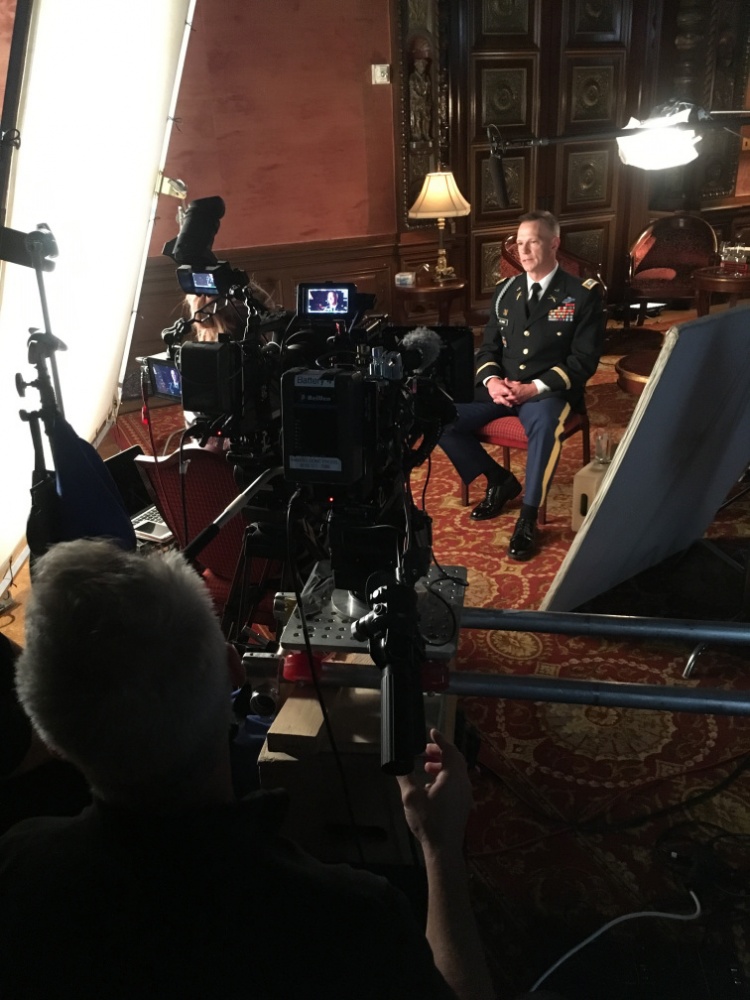 Master Sgt. Vito Bertoldo, a cook who was initially classified as 4-F and ineligible for military duties due to poor eyesight, will be featured in one of the eight episodes of the series “Medal of Honor” which begins streaming Nov. 9.

One of the program’s executive producers is Robert Zemickis, the director of the Back to the Future movies and Forest Gump.

Fighting solo, Bertoldo stopped a German attack for almost two days, fighting desperately to buy time for his command and fending off German tanks and infantry on January 9 and 10, 1945.

The 42nd Infantry Division is now part of the New York Army National Guard and several Guard Soldiers appear in the production.

Although he was not eligible to be drafted, Bertoldo volunteered for service after his younger brother enlisted.

Bertoldo, from Decatur, Illinois, said later, he talked himself into “limited service in the Military Police.” But he wanted to do more.

Bertoldo was assigned to the 42nd Division’s Company A, 1st Battalion, 242nd Infantry Regiment; arriving in France in December 1944.

The 42nd had earned the nickname “Rainbow Division” during World War I, when it was formed of National Guard units from around the country.
Bertoldo was a cook with an infantry company. But he volunteered for infantry assignments “to do something more than just stand guard or do the cooking,” he admitted to the “Independent Journal” in 1960.

Bertoldo was persistent and determined to find a way into combat service.

“My only disciplinary problem was with a cook who could not get along with the mess sergeant,” said Capt. William Corson in a letter to fellow Rainbow Division veterans in 1995.

“The solution came quickly when an order was issued by battalion for a detail of three men from each company to serve as a battalion command post guard. I told the first sergeant that the cook, Vito Bertoldo, was number one on that detail. Good riddance, I thought.”

Bertoldo, then a private first class, could not have predicted what that new assignment would mean.

The Rainbow Division task force of three infantry regiments near Strasbourg faced an attack by the German 25th Panzer Grenadier and 21st Panzer Divisions on January 5, 1945. Hitler’s Operation Nordwind was the final German offensive on the western front.

The German objective was the capture of Hatten and nearby village of Rittershoffen, held by the 242nd’s second battalion. The Germans wanted to move west and control all of northern Alsace.

In their path were the inexperienced infantry regiments of the 42nd Division, fighting without their divisional artillery or support elements.

“A new assault was then launched against Company A, which had taken up positions in Maginot Line pillboxes (outside of Hatten), and Germans by-passed them,” the 42nd Infantry Division history records. “The enemy then made their way into Hatten and began a furious house-to-house battle.”

Bertoldo’s former company was quickly surrounded and overrun. Captain Carson was wounded and captured with dozens of his Soldiers.

At the battalion command post in Hatten, Bertoldo volunteered to hold off German forces as the headquarters staff retreated.

“Imagine my surprise in 1945,” Carson said, “when at Camp Atterbury, Indiana I picked up a copy of The Chicago Tribune and saw on the front page a picture of President Truman pinning the Congressional Medal of Honor on the former cook,” Carson said.

“All I did was try to protect some other American Soldiers from being killed,” Bertoldo would tell newspapers back home. “At no time did I have in mind that I was trying to win something.”

Bertoldo drove back repeated German attacks for 48 hours. He was exposed to enemy machine gun, small arms and even tank fire.

“From cook to a one-man defense against an oncoming enemy, it’s a story of courage under fire but even more, the warrior spirit of the American Soldier,” Taluto said of Bertoldo’s valor.

Moving among buildings in Hatten to fire his machine gun, at one point Bertoldo strapped it to a table for stability. He fired on approaching German tanks and panzer grenadiers, repeatedly defeating the German attacks.

“On the close approach of enemy soldiers, he left the protection of the building he defended and set up his gun in the street,” the Medal of Honor citation states, “there to remain for almost 12 hours driving back attacks while in full view of his adversaries and completely exposed to 88-millimeter, machine gun and small arms fire.”

Bertoldo withstood “the attack of vastly superior forces for more than 48 hours without rest or relief, time after time escaping death only by the slightest margin while killing at least 40 hostile soldiers and wounding many more,” the citation says.

“I did nothing more than any other Soldier would have done in the same situation,” Bertoldo said.

“It was Bertoldo’s devotion to duty and his fellow Soldiers that leaves a lasting impression,” Taluto told the TV show interviewers.

“Vito obviously took his responsibilities seriously and without compromise. He stood his ground time after time and made a difference,” Taluto said.

“Bertoldo fired a machine gun, his rifle and threw hand grenades at the enemy,” his company commander said after the war. “He was a one man task force they could not defeat.”

“His actions are the essence of both personal courage and selfless service,” Lombardo said. “Faced with overwhelming odds he persevered against enemy tank, machine gun and small arms fire and then stayed behind and single-handedly covered the withdrawal of his fellow Soldiers.”

While Bertoldo received the Medal of Honor, every member of the battalion fought tenaciously.

The 1st Battalion, 242nd Infantry was awarded Distinguished Unit Citation for its actions in Hatten.

The Rainbow Division Soldiers, without the benefit of armor, artillery or air support, fought the Germans to a standstill.

German Col. Hans Von Luck, a regimental commander in the attacking 21st Panzer Division, recalled the fight as “one of the hardest and most costly battles that had ever raged on the western front”—and the American infantry held off the Germans for two weeks.

Bertoldo continued to serve with the 42nd Division through the end of the war, rising in the ranks to master sergeant.

Bertoldo returned home to Illinois in December 1945 and served as Veterans Administration representative in Chicago for a year before moving to San Francisco in 1947, working until 1958.

“The best way to honor the dead is to try to make it up to the living who have given the best years of their lives in the interest of peace,” Bertoldo said 20 years after his combat actions.

After leaving the VA, Bertoldo started a landscaping business in Marin County.

He passed away in July 1966 just shy of age 50 after a long battle with cancer.

The Medal of Honor series employs interviews, actors and archival footage to tell the story what many surviving Medal of Honor recipients describe as “the worst day of their lives.”

“When you read citations of (Medal of Honor) recipients, often times it would not be far-fetched to think to yourself there is no way this person could have done this,” said Mike Dowling, a Marine Corps veteran of Iraq and technical advisor for the series. “Only they did do that, and their stories deserve to be told.”

“The lesson for military members today is that every Soldier, regardless of military skill, is a Soldier first,” Lombardo said. “Bertoldo was an unassuming man who volunteered as a cook and relied on his basic training and survival instincts to overcome and defeat insurmountable odds.”

Telling the story of the heroism of a former Rainbow Soldier helps extend Bertoldo’s legacy to modern Soldiers, Taluto said, explaining why he participated.

“I was truly honored to participate,” Taluto said. “As a senior leader it always gives me great pleasure to talk about the character of the American Soldier.”