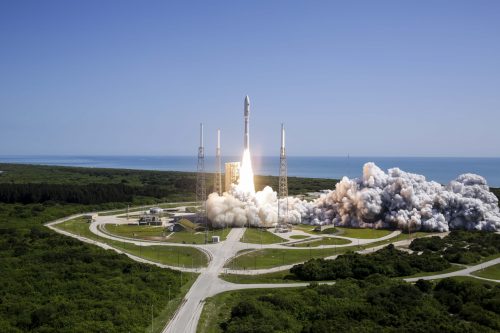 On Oct. 22, the MUOS team raised the MUOS-5 satellite to an operationally-suitable orbit. The team completed a series of deployments of the satellite’s solar arrays and antennas, with the last occurring successfully Oct. 30.

MUOS-5 launched June 24 from Cape Canaveral Air Force Station and experienced a failure of its orbit raising propulsion system that halted the satellite’s transfer orbit maneuver to its geosynchronous test orbit. The MUOS team ensured the satellite remained stable, safe, and under positive control while it investigated the issue and examined options.

“We are very proud of the commitment our team members demonstrated,” said Capt. Joe Kan, program manager for the Navy Communications Satellite Program Office. “Working together with industry, we were able to execute an alternative propulsion method to maneuver MUOS-5 to reach a position that is operationally suitable.”

MUOS-5 is scheduled to begin on-orbit Nov. 3. It will complete the five-satellite MUOS constellation once on-orbit testing is complete.

“The system will undergo on-orbit testing before final acceptance of the system by the Navy and offering it up for operational use,” said Cmdr. Jason Pratt, MUOS principal assistant program manager. “The satellite and its payloads will go through rigorous tests with our ground systems and terminals to make sure everything operates properly.”

The MUOS system is designed to provide improved communications capabilities to users around the world, regardless of where they are in relation to a satellite. The MUOS constellation and associated ground network will provide 3G-like cellphone communications for the next decade and beyond.