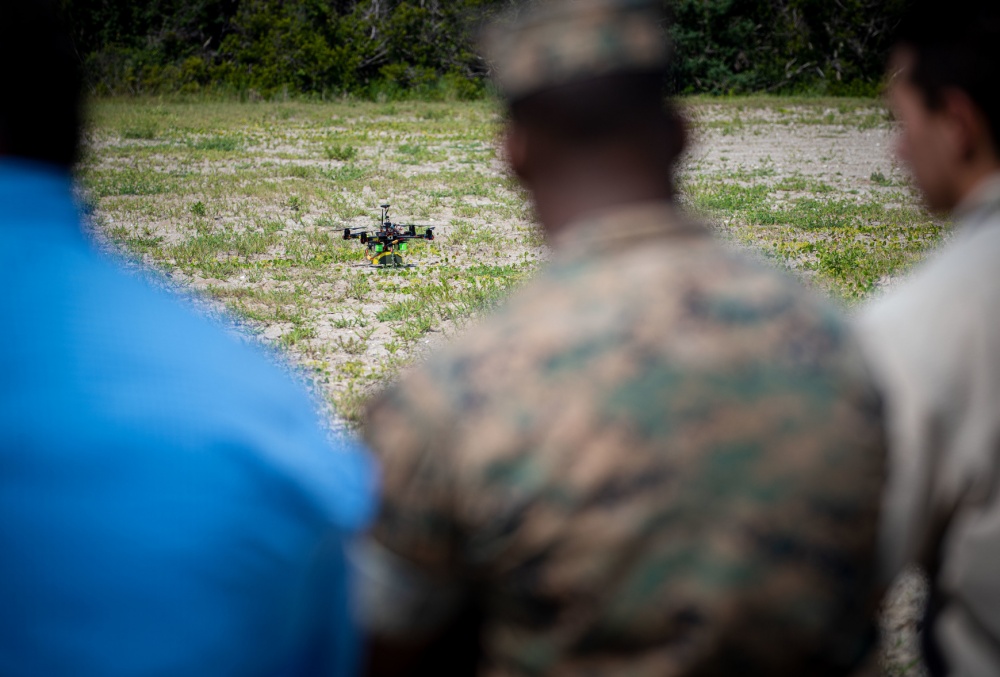 The team of NIWC Atlantic engineers has been advancing unmanned aerial vehicle (UAV) technology through their work on autonomous drone swarms for nearly a decade, and most recently demonstrated hardware consolidation and integration with another NIWC Atlantic project at the exercise.

Swarming capability involves one or two pilots getting a flock of drones airborne to act autonomously as a team to carry out a mission. It’s a feat that requires a highly-skilled, multifaceted team of engineers and scientists.

“We’re on the forefront of developing these technologies for the Navy and Marine Corps,” said unmanned aerial systems (UAS) subject matter expert and SAUSR Range team lead Brad Knaus. “We can see from these exercises what the Navy needs when it comes to developing that technology. It gives us a sense of fulfillment that what we’re doing directly affects them,” he added. “That’s what always excited us about working with this technology.”

The team briefed ANTX East assessors on some of the newest swarming features such as tablet consolidation, payload delivery, drone decoys and Sensor Platform to Identify Expeditionary Cyber Signals Environments for Exploitation (a.k.a. SPIDER SENSE) integration.

Integration of a plugin for an Android Tactical Assault Kit, a tablet-based program, is the most recent advancement in drone swarming control. The team also consolidated ground control station hardware to fit into a hard case by using some collapsible parts. That consolidation means less equipment and greater mobility — and therefore fewer warfighters — per swarm in theater.

Demonstrating recent advancements at ANTX East gives SAUSR Range and SPIDER SENSE teams the opportunity to gain feedback from over 100 assessors and to brief Navy officials on the latest warfighting technology.

“It’s been a great experience, having the ability to come out here with a dedicated team that’s focused on showing what this technology can do,” said Knaus. “The feedback gives us insight on what we need to hone in on next.”

When asked what’s on the horizon for drone swarm technology, Knaus describes current efforts in using drones as decoys and the eventual transfer of swarming technology into other domains. He also predicts the next trend is multi-domain swarming, or transferring drone swarm technology to other types of vehicles like unmanned ground vehicles (UGVs).

The use of swarms of both UGVs and UAVs to thwart adversary threats could help warfighters take advantage of new offensive tactics.

Efforts in swarm technology, whether current or predicted, point toward a common goal: a net multiplication of force.

“Current technology is a net reduction of force. If you want one drone in the air, it may take 10 people on the ground supporting it,” said Chad Sullivan, NIWC Atlantic mechanical engineer. “What we’re trying to do with swarming is achieve a net multiplication of force where you need fewer people than you have assets in the air.”