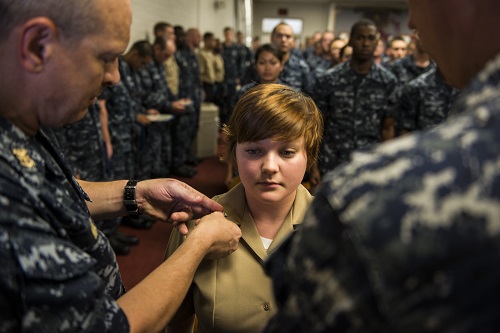 APRIL 20, 2016, WASHINGTON (NNS) – On April 19, the Navy announced quotas and policy updates for the 2016 Meritorious Advancement Program (MAP) in NAVADMIN 089/16, which will expand commanding officers’ (CO) ability to recognize and advance Sailors with top performance in rates and paygrades needed to keep the Navy healthy with great talent.

These changes are based on recommendations from senior enlisted leaders throughout the fleet and are intended to increase the overall number of MAP advancements for Sailors this year by expanding program eligibility to include shore command as well as Professional Apprenticeship Career Track (PACT) Sailors.

MAP is designed to give CO’s greater authority to recognize superior performance and advance their very best Sailors. The 2016 fall advancement cycle planning will incorporate the number of Sailors advanced via MAP to arrive at quotas for advancement based on Navy Wide Advancement Exam (NWAE) results.

This year, there will be 3,081 quotas for Sailors to advance to the next pay grade of E-4, E-5 and E-6, which is an increase of 799 quotas from 2015. There will be 2,212 quotas for sea commands, 678 quotas available for shore commands and 191 quotas for designated Echelon 2 commanders to distribute within their claimancy. Advancement quotas by paygrade are:

Quotas by Unit Identification Codes (UIC) are posted on the MAP web page at: http://www.public.navy.mil/bupers-npc/career/talentmanagement/Pages/MAP.aspx.

Additionally, some of the other key changes included in the MAP policy update include:

* Professional Apprenticeship Career Track (PACT) Sailors will be now eligible for MAP if they:
o Complete a minimum of 12 months-time onboard their permanent duty station
o Meet time-in-rate (TIR) requirement for advancement to E-4 of Jan. 1, 2017 and have an approved quota for rating designation (i.e. approved quota in C-WAY) via the NWAE or Rating Entry Designation
o Do not have a designation approval for an A-school required rating.
* The TIR requirement has been expanded to Jan. 1, 2017, decoupling MAP from the NWAE requirements.
* Expand MAP eligibility to Sailors at shore commands.
* To help ensure rating health, communities that are overmanned will be managed more closely. CO’s who desire to MAP a Sailor in a controlled rate listed in NAVADMIN 089/16 will nominate Sailors to their designated Echelon 2 command for consideration.
o If a Sailor is not selected for MAP by their designated Echelon 2 command, that quota will be returned to the subordinate command.
o Controlled quota requests must be made by June 15; selections will be completed by June 30.

MAP selections are from July 1 to Aug. 31, but commands are encouraged to begin their MAP selection process and submit their MAP Certification Letter (MCL) as early as possible to ensure Sailors are advanced and paid expeditiously. Sailors’ advancement is effective the date of the command’s MCL to Navy Personnel Command, or July 1, whichever is later.

Because of manning reductions and changes in force structure, a moratorium has been placed on MAP for Selected Reserve (SELRES) Sailors for 2016 in order to preserve and maximize advancement opportunity. However, Navy recruiting districts (NRD) will have one MAP quota per NRD for Reserve Sailors filling canvasser recruiter billets.

More information on MAP, including quotas by UIC, controlled rates information, forms, points of contact, and answers to frequently asked questions can be found at http://www.public.navy.mil/bupers-npc/career/talentmanagement/Pages/MAP.aspx.