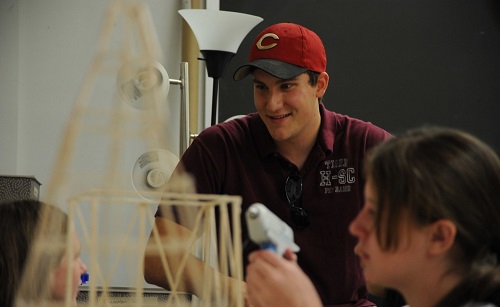 The rising Spotsylvania 8th grader soon realized it was the best decision she ever made.

While engaged in a week of STEM camp activities, Madeline was “getting into this” so much she enrolled in advanced placement classes that included engineering.

“Then I found out about the Junior Mentor Program, and was like ‘yeah, that would be really fun. Hopefully, I’ll get in,'” she recalled.

Madeline — now a Spotsylvania High School freshman — got in.

As a junior mentor at the 2016 Naval Surface Warfare Center Dahlgren Division (NSWCDD)-sponsored STEM Summer Academy, she paused and spoke about her potential to become a Navy scientist or engineer one day, pointing out her NSWCDD engineer mentor started out as a “camper.”

Like his protege, David Campbell — an NSWCDD electromagnetic railgun engineer for the past three years — became enthusiastic about STEM as a middle school student at an annual summer camp. Although the Junior Mentor Program was not available when he was a high school freshman, the engineer took advantage of high school and college internship programs through NSWCDD.

“It’s like a progression,” Campbell told the middle school campers’ parents during a briefing at the annual event held at King George Middle School June 27 to July 1. “You start at this camp and it gives you an interest and idea of what a STEM career could be like. You’re surrounded by people who do STEM careers. You’re surrounded by activities where you can be creative and you can keep getting involved. There’s a lot of opportunity out there.”

Campbell recommended opportunities available for high school students via the Science and Engineering Apprenticeship Program (SEAP), and for the college students the Navy Pathways Internship Program.

Parents and their children, as well as teachers and local officials, listened intently as the railgun engineer shared his personal experience and knowledge about programs which lead to STEM careers.

“Visiting the STEM Summer Academy yesterday was a full-circle moment for me,” said Tammy Indseth, a King George County School Board member and NSWCDD scientist. “Listening to David Campbell — a former STEM camper and King George High School graduate — describe the inspiration and opportunities he received that shaped his decision to obtain a physics degree and become a launcher engineer for the electromagnetic railgun program, reaffirmed the importance of the STEM Summer Academy.”

Campbell was accepted into the SEAP internship program at NSWCDD as a high school student. As a college student, he worked on electromagnetic railgun technology via the Navy Pathways Internship Program — established to provide degree-seeking students with exposure to public service while enhancing their educational experience, and possibly providing financial aid to support their educational goals.

“He works with his mentor now,” said Madeline in reference to Campbell’s NSWCDD job working with his former STEM Summer Camp mentor. “Whoa! Maybe if I keep at it, I might actually be working with him one day.”

Madeline was among nine junior mentors helping run the camp while working on their own STEM projects. The high school students worked with teachers and senior mentors to advise the campers, and gave parents tours of the camp and its various activities.

“It’s important to inspire additional students to pursue a STEM degree and career, which will ultimately benefit the Navy by ensuring there are enough scientists and engineers in the workforce to allow it to fulfill its mission,” said Indseth. “The STEM Summer Academy is continuing to do just that.”

In all, 96 students — from middle schools located in Virginia’s Stafford, Spotsylvania, and King George counties in addition to Fredericksburg and Dahlgren — developed their teamwork and problem-solving skills in math and science, as they partnered with a teacher and an NSWCDD scientist or engineer.

“I feel very blessed to have this opportunity and to be able to bring four students with me,” said Ann Steimer, a teacher at the Tree of Life Preparatory School in Fredericksburg. “You can’t get this in a small school situation.”

“It’s a whole week of being immersed into STEM, being creative, and talking to other students,” said Campbell. “It’s not like students come here to work by themselves. They are teamed with students they have never met. It’s really awesome to see how their relationship transforms over time and how well they start working together as they start to mesh and understand each other’s personalities.”

Camp activities included a tower design, build and brief challenge, water rocket challenge, a life science activity, and 10 robotic challenges. Before, during, and after each challenge 17 middle school teachers and 17 Navy scientists and engineers worked closely with the student teams.

The middle school students built water rockets and determined the optimal fuel load to maximize height. They explored epidemiology — the study and analysis of the patterns, causes, and effects of health and disease conditions in defined populations.

What’s more, the student teams constructed towers from balsa wood and briefed an audience on the tower design. They predicted the number of each color of M&Ms candy in a large bag after compiling statistics on M&Ms in smaller bags. The campers also maximized the cargo carrying capacity of boats they built out of aluminum foil and straws.

“I’m excited to use some of these strategies in my own classroom,” said Steimer. “I feel grateful that four of our TLC students had the opportunity that they wouldn’t get anywhere else to be exposed to different careers.”

Their opportunity included activities designed to foster communication skills. Throughout the event, students consulted with each other and briefed their STEM projects to the academy’s teachers and mentors.

“It’s not just STEM; it’s actually communicating with other students,” said Campbell. “If I didn’t learn communication skills, I wouldn’t have the relationships that I do today with the people on base and I wouldn’t be able to communicate as effectively with those I work with. In order to make an idea successful, you have to go through multiple channels and those channels require you to communicate with other people.”

The College of William & Mary provided curriculum and staffing support for the camp.

“In the teachers’ feedback, they frequently commented that they most enjoyed getting to work with the students outside of school in a less-structured environment on engaging, hands-on activities,” said Kelley Clark, representing the College of William & Mary STEM Education Alliance at the event. “In addition, several teachers commented that NSWCDD’s STEM Academy has provided them with some of the best professional development they have received.”

The STEM Summer Academy — co-sponsored by the Office of Naval Research Virginia Demonstration Project — was initiated in 2004 to show a diversity of pre-teenagers and teenagers that math, science and engineering are fascinating, fun and rewarding.

The initiative could eventually expand beyond the Navy and evolve into a national demonstration project encompassing all Department of Defense laboratories, in a sustained effort to secure the long-term competitiveness of America’s science and technology workforce by promoting more interest in math and science among children at an earlier age.

“Our research has consistently shown that the impact of scientist and engineer mentoring through NSWC Dahlgren’s STEM outreach efforts is significant,” said Clark. “Several of this year’s mentors expressed how much they love giving of their time in this way and helping students to see the benefits and opportunities of pursuing a career in the STEM fields.”