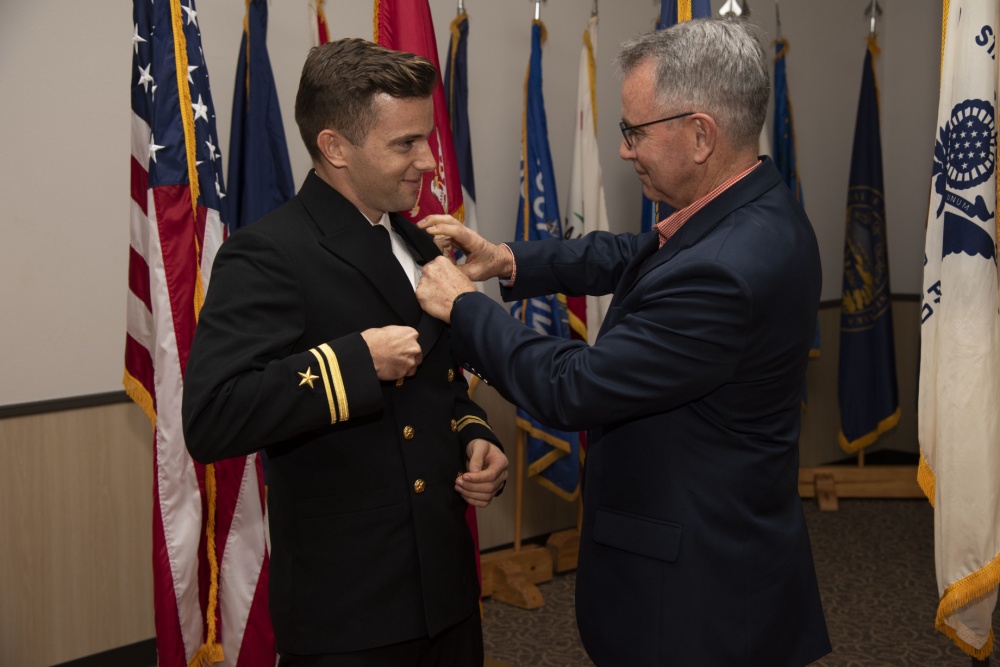 Lt. j.g. Caleb Nicholson completed flight training with Training Air Wing (TRAWING) 4 and received his Wings of Gold during a ceremony at the Catalina Club on base.

VT-35 is one of two Advanced training squadrons for multi-engine aircraft, however it is the only squadron to train future Osprey pilots. Student naval aviators fly the T-44C Pegasus, a twin-engine, pressurized, fixed-wing monoplane. The training syllabus, which is the same for both Navy and Marine Corps pilots, focuses on advanced instrument flight, formation flying, overwater navigation, and low-level tactical formation/navigation. The squadron executes more than 14,000 flight hours each year, encompassing more than 52,000 landings and nearly 9,500 student flight-training events. Graduates report for subsequent training at their respective fleet replacement squadron according to their selected platform.

A native of New Bern, North Carolina, Nicholson grew up in a military family. His father, who joined him for the winging ceremony, is a 22-year U.S. Marine Corps combat engineer veteran. His paternal grandfather was an aviation machinist’s mate in the U.S. Navy during the Korean War and both his brothers currently serve in the U.S. Coast Guard. Nicholson graduated from Palm Beach Atlantic University in Palm Beach, Florida with a Bachelor of Science in Mathematics and decided to pursue a career in the U.S. Navy. He commissioned through Officer Candidate School in Newport, Rhode Island.

“It is an honor to follow in the footsteps of those who have gone before me and to lead the way for those who will come after,” Nicholson said. “For this reason I am incredibly grateful and humbled to join the team of Navy pilots who will ensure the successful execution of the COD mission.”

The Osprey is a tilt-rotor aircraft capable of vertical take-off and landing, and horizontal flight as a turboprop aircraft. The CMV-22B is the Navy variant, which will replace the C-2A Greyhound for the carrier onboard delivery (COD) mission. It has an increased operational range, greater cargo capacity, faster cargo loading/unloading, increased survivability and enhanced beyond-line-of-sight communications compared to the Greyhound.

VRM-30 stood up Dec. 14, 2018 and reports to Fleet Logistics Multi-Mission Wing in San Diego. The squadron is awaiting delivery of the first CMV-22B, expected to arrive concurrently with Nicholson in the summer of 2020. The CMV-22B is slated to deploy in 2021.

“The CMV-22 Osprey will provide an incredible capability and flexibility to the critical COD mission,” VRM-30 Commanding Officer Cmdr. Trevor Hermann said. “Caleb will be joining a team of hand-selected, high performing plank owners that have built the squadron from nothing. Similar to a start-up company, our success relies on self-starters that thrive in dynamic environments. We are building the squadron infrastructure concurrently with the mastering of our craft as an operator, maintainer, or administrator. I have no doubt that the Navy got it right with the selection of Caleb. We look forward to him joining the Titan Team.”

TRAWING 4 is one of five air wings under Chief of Naval Air Training (CNATRA). CNATRA, headquartered in Corpus Christi, trains the world’s finest combat quality aviation professionals, delivering them at the right time, in the right numbers, and at the right cost to a naval force that is where it matters, when it matters.