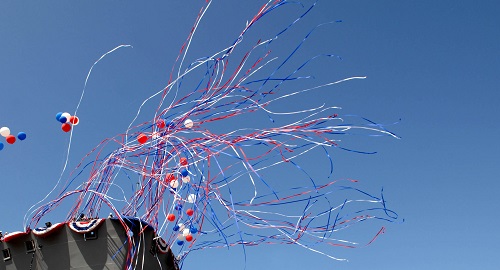 The launch of ESB 4 involved slowly flooding the launching dock with water until the ship could freely float for the first time. Following launch, the ship completed construction and final outfitting before going to sea to complete a series of tests and trials prior to delivery in early 2018.

“We’re making tremendous progress on this ship,” said Capt. Scot Searles, Strategic Sealift and Theater Sealift program manager, Program Executive Office Ships. “We’ll begin powering many of the ship’s engines and systems as early as next month as we prepare to get underway for sea trials in the coming months.”

GD-NASSCO is currently under contract to build ESB 5, which started fabrication in January and the keel laying is planned for early September. They are also the construction yard for the Navy’s John Lewis-class fleet replenishment oilers.

As one of the Defense Department’s largest acquisition organizations, PEO Ships is responsible for executing the development and procurement of all destroyers, amphibious ships, special mission and support ships, and boats and craft.