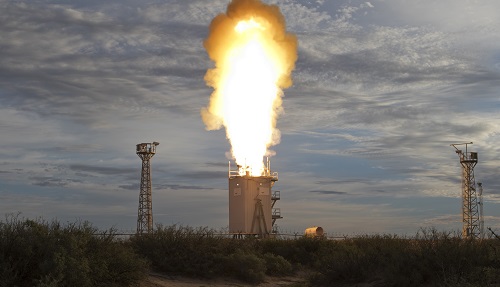 During the test, an unmodified U.S. Marine Corps F-35B from the Marine Operational Test and Evaluation Squadron (VMX) 1, based in Edwards Air Force Base, acted as an elevated sensor to detect an over-the-horizon threat. The aircraft then sent data through its Multi-Function Advanced Data Link to a ground station connected to USS Desert Ship (LLS-1), a land-based launch facility designed to simulate a ship at sea. Using the latest Aegis Weapon System Baseline 9.C1 and a Standard Missile 6, the system successfully detected and engaged the target.

While the goal of this test was to prove the compatibility of these systems within existing NIFC-CA architecture, this future capability will extend the Navy’s engagement range to detect, analyze and intercept targets in operational settings. Using any variant of the F-35 as a broad area sensor, the aircraft can significantly increase the Aegis capability to detect, track and engage.

“This test was a great opportunity to assess the Navy’s ability to take unrelated technologies and successfully close the fire control loop as well as merge anti-surface and anti-air weapons into a single kill web that shares common sensors, links and weapons,” said Anant Patel, major program manager for future combat systems in the Program Executive Office for Integrated Warfare Systems (PEO IWS).

The test was a collaborative effort across the Navy and Marine Corps, White Sands Missile Range and industry partners leveraging a U.S. Marine Corps F-35B and the U.S. Navy’s Aegis Weapon System to support the distributed lethality concept in the fleet.

“This test represents the start of our exploration into the interoperability of the F-35B with other naval assets,” said Lt. Col. Richard Rusnok, VMX-1 F-35B det. officer in charge. “We believe the F-35B will drastically increase the situational awareness and lethality of the naval forces with which it will deploy in the very near future,” he added.

Aegis Baseline 9 delivers a fully open architecture system on U.S. destroyers and is the basis for current and future Aegis Integrated Air and Missile Defense. Baseline 9 is being fielded on in-service destroyers, new construction destroyers and Aegis Ashore. The Aegis Common Source Library enabled derivatives are on the Coast Guard cutters, Freedom-variant Littoral Combat Ships and will be included on the upcoming frigate ships.

PEO IWS is an affiliated Program Executive Office of the Naval Sea Systems Command. IWS is responsible for spearheading surface ship and submarine combat technologies and systems, and for implementing Navy enterprise solutions across ship platforms.