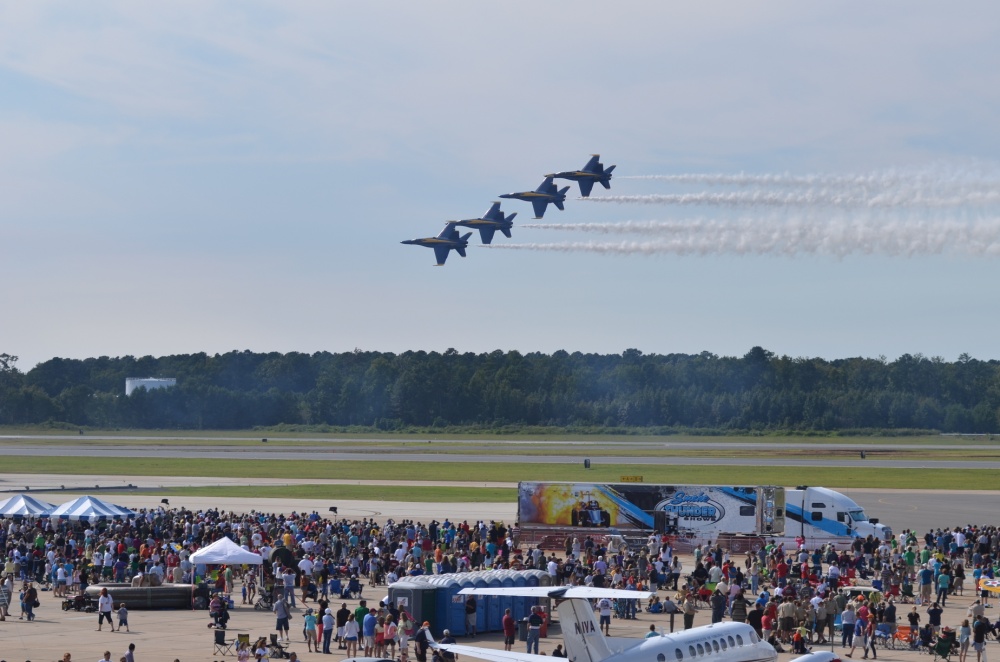 The NAS Oceana Air Show is the Navy’s premier aviation event in North America, drawing more than 250,000 spectators each year. The last time the air show was canceled was in 2013 due to budget shortfalls from sequestration.

Although there are no plans to reschedule the show, the Navy is considering showcasing the best of Naval Aviation to fans virtually.

“The air show brings aviation fans from all over the world each year,” said Capt. John Hewitt, Commanding Officer, NAS Oceana. “Unfortunately, the risks associated with large gatherings are too considerable to ensure absolute safety for our guests. While we won’t have the traditional show this year, we hope to still provide a unique experience virtually for our fans and our entire Hampton Roads community.”

The air show often serves as a homecoming for pilots in the Blue Angels who may have been stationed there earlier in their careers. NAS Oceana is the Navy’s East Coast Master Jet Base, home to F/A-18 Super Hornet squadrons.

The Blue Angels’ commanding officer, Cmdr. Brian C. Kesselring, trained to be an F/A-18C Hornet pilot at Oceana after he was designated a naval aviator in 2003. His first fleet assignment was also at Oceana as a member of the “Gunslingers” of VFA-105, where he flew the F/A-18C and F/A-18E and completed two combat deployments aboard USS Harry S. Truman (CVN 75) in support of Operation Iraqi Freedom.

The Blue Angels have not announced their performance schedule for 2021.

The NAS Oceana Air Show originated in 1953 and has been held nearly every year since 1962. It has received an unprecedented four Dick Schram Memorial Community Relations Awards from the International Council of Air Shows and the Military Child Education Coalition Pete Taylor Partnership of Excellence Award.

“The health and safety of people who live, work and play in Virginia Beach remains our top priority,” said Virginia Beach Mayor Bobby Dyer. “The annual air show draws thousands of spectators to our great city each year, so it will be greatly missed. We eagerly look for its return next year as we continue to do our part to minimize the spread of COVID-19.”

Future air show updates will be posted on the NAS Oceana Air Show website at http://oceanaairshow.com and Facebook page at https://www.facebook.com/OceanaAirShow.