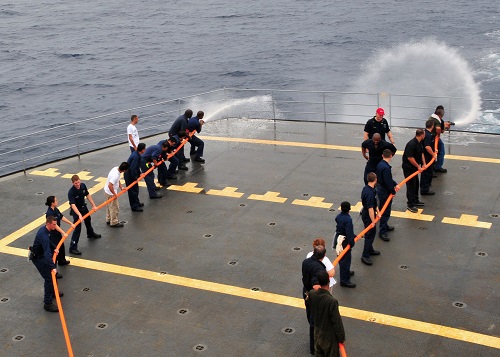 “Civilians are a vital part of our Navy team whose diverse talents and skills unequivocally strengthen our force,” said Chief of Naval Personnel Vice Adm. Robert Burke. “As with our Sailors, we have a responsibility as leaders to ensure that our Navy Civilians are recognized for their service and afforded similar opportunities for professional growth. There is no doubt in my mind this approach will yield an even greater competitive edge for the Navy.”

Effective immediately, as with their military counterparts, Navy civilian employees will no longer be required to log onto Navy eLearning or Total Workforce Management Services to complete mandatory annual training. Instead, commands should conduct required training during small-group face-to-face sessions that engage employees and foster meaningful discussion. The only exception to this new policy is the Cyber Awareness Challenge that will continue to be an online training requirement. This change in alignment with policy released in NAVADMIN 072/17 in March for Navy uniformed personnel.

The NAVADMIN also outlines other efforts commands should take in support of their Navy Civilian workforce.

– Leaders are encouraged to provide timely and constructive feedback to their civilian employees.

– Civilian training advocates will advise commanders on opportunities for civilian employee development, training and education. This individual will work closely with OPNAV N1C, command Directors of Human Resources (DCHR), and the Office of Civilian Human Resources (OCHR), to ensure that appropriate visibility is placed on civilian workforce training.

– To more effectively manage civilian personnel assignments, the approval for Navy civilians to serve overseas in excess of nine years will be delegated to echelon II commands.