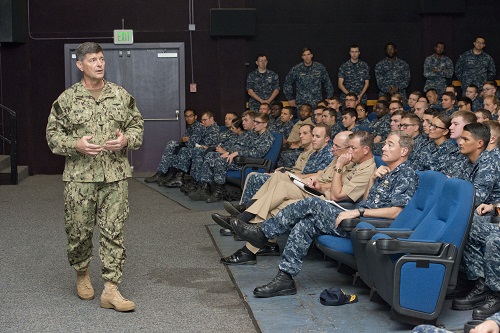 The seven collaterals identified for immediate elimination were selected from a review of Fleet units and will have minimal impact to mission: Athletics Officer, Library Officer, Health Benefits Advisor, Community Relations Project Officer, Enlisted Safety Committee (Safety petty officers have not been eliminated, but the Committee will be combined into the Enlisted Safety Council), Knowledge Management Officer, and Voting Officer.

This effort is part of a larger objective to remove unnecessary burdens and distractions from Sailors to allow them to focus on core warfighting and to better allow leadership to evaluate Sailors on performance in their primary duties.

“There’s this idea that without a bunch of collaterals, you’re just not going to be competitive for advancement, and what that does is water down our mission focus,” said Chief of Naval Operations (CNO) Adm. John Richardson during an April all-hands call in Hampton Roads, Va.

Vice Chief of Naval Operations (VCNO) Adm. Bill Moran has been closely involved in the development of this NAVADMIN and signed as the releasing authority. VCNO notes the next step is to identify additional collateral duties that are trivial, have outlived their usefulness, are implicit in primary billet descriptions, or should be temporary only.

“It’s not just about removing collateral duties,” said Moran. “It’s about taking a hard look at all the demands we put on our ships, squadrons and our Sailors, and refocusing our efforts on eliminating the unnecessary tasks that ultimately distract our Sailors from their primary duties.”

Master Chief Petty Officer of the Navy Steven Giordano will lead a working group to conduct a comprehensive review of all collateral duties and will report his findings, via Fleet leadership, directly to CNO later this summer.

Navy leadership asked the entire Fleet to participate in this effort by identifying outdated or redundant duties for the working group’s consideration.

“The NAVADMIN itself is just letting the Navy know that we are truly looking at this, and the way ahead will be determined by them, so their input is going to matter in this,” said Giordano. “I encourage everyone to be part of it.”