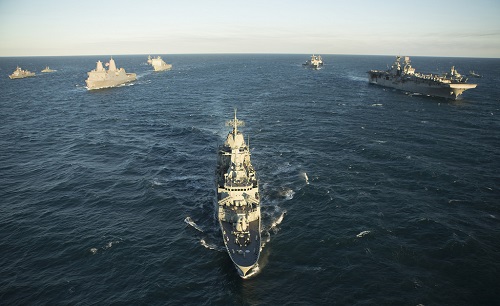 Exercise Talisman Saber is a biennial exercise that unites more than 33,000 U.S. and Australian personnel to build on partnerships, interoperability and the ability to respond to contingencies in the region.

Prior to departing Norfolk for Guam, the two Sailors had to complete a battery of requirements, including obtaining a forklift license. According to Senior Chief Logistics Specialist Gregory Bell, the requirements are designed to build a pool of Sailors for the command’s Enterprise Logistics Response Team (ELRT).

“The ELRT consists of specially trained Sailors, officers and civilians across several supply specialties who are ready to deploy on short notice, wherever they are needed around the world,” said Bell. “The two Sailors we sent to Guam for Talisman Sabre support are always lauded for their dedication, professionalism and military bearing. These are two exceptional Sailors who completed the ELRT requirements in an expeditious manner. They were also the first to answer the bell and volunteer to represent NAVSUP FLC Norfolk when the mission was ordered.”

After arriving in Guam, Assoti and Shipman reported to NAVSUP FLC Yokosuka, Site Marianas. They later went to the Defense Logistics Agency (DLA) warehouse where they worked the majority of the time building Air Force pallets. The 463L pallet dimensions are 108-by-88-by-2 1/4 inches. They weigh 337 pounds and have a total load capacity of 10,000 pounds. The desired load capacity is 7,500 pounds. They are able to hold several standard-size pallets, they have a balsa wood core and are covered with corrosion-resistant aluminum.

“The first flight wasn’t scheduled to leave until June 28, so we had time to prepare the pallets and make sure everything was correct,” said Shipman. “We would receive palletized material from DLA. Based on the material’s size and weight, we would use forklifts to move material and position it on Air Force pallets according to aircraft specifications.”

Once pallets were built, they were covered with a large plastic cover on the top and sides. They were then covered with cargo nets to ensure there would be no movement during flight. Once the material was secured with netting, a forklift was used to move the completed pallet to a staging area. Drivers from Anderson Air Force Base would then load the material on to tractor trailer trucks to be transported to Anderson.

Shipman said there were some challenges while in Guam, but the assignment turned out to be very rewarding.

“With any new task there are always little challenges you don’t anticipate,” said Shipman. “I think for us it was how meticulous we had to be to ensure the cargo netting was perfect for every flight. The best part was working with a great group of people and all the delicious food in Guam.”

Shipman had the added bonus of visiting on weekends with his brother, who is also in the Navy and stationed in Guam.

Shipman was thrilled to have the opportunity to serve in Guam, and looks forward to using some of his new skills to help others.

“If there are future assignments that require building Air Force pallets, I’ll be able to help train other Sailors to prepare them for their mission,” added Shipman.

NAVSUP GLS provides global logistics for a global Navy. The organization is made up of more than 6,300 military and civilian logistics professionals operating from 105 locations worldwide, providing an extensive array of integrated global logistics and contracting services to Navy, Marine Corps, joint operational units, and allied forces across all warfare enterprises.