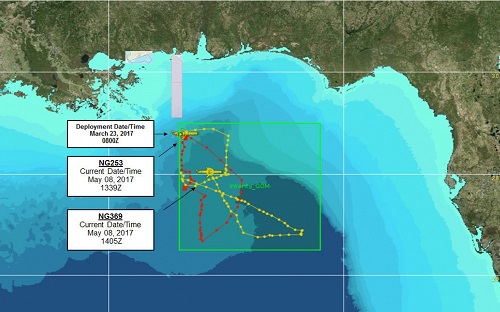 “Naval Oceanography has over two decades of experience operating unmanned systems,” said COMNAVMETOCCOM and Oceanographer of the Navy Rear Adm. Tim Gallaudet. “The purpose of the demonstration was to build on that experience by expanding and strengthening our network of partners to innovate faster so we can make better decisions quicker than our adversaries.”

COMNAVMETOCCOM Deputy Commander and Technical Director Dr. Bill Burnett said, “We’ve been deploying unmanned systems in the Gulf of Mexico since March to not only showcase their ability to perform the ‘dull, dirty and dangerous’ missions to our partners in the Fleet and private sector, but also to assess the feasibility of hosting a 2018 Fleet Experimentation (FLEX) event for unmanned systems with the Naval Warfare Development Command.”

The Mississippi Gulf Coast is too familiar with natural disasters that change the battlespace environment. The HA/DR mission combined near-shore data collection capabilities utilizing multiple IVER-3s and REMUS 100s to collect bathymetry and side scan sonar data. The data provides water depths and tactical recommendation products as well as hazards to navigation, clear transit and anchorages for incoming support vessels.

In any environment, it is imperative that Navy forces understand the ocean and atmosphere. The Theater ASW mission provided near real-time oceanographic data to show how an accurate assessment of sound speed profiles better represents the ocean’s effects on sonar performance. The Naval Oceanographic Office (NAVOCEANO) worked with the U.S. Air Force 53rd Weather Reconnaissance Squadron “Hurricane Hunters” to deploy profiling floats to measure conductivity, temperature and depth and drifters to track ocean currents and changing water column properties. These unmanned systems continuously collect data that is communicated to NAVOCEANO, who then processes it into ocean and atmospheric models that run on supercomputers at the Navy DoD Supercomputing Resource Center.

Knowing the environment improves the Fleet’s ability to safely maneuver and maintain command of the seas. The Sea Control mission focused on deploying multiple, networked unmanned underwater and surface systems from USNS Maury (T-AGS 66) to deliver environmental assessments in support of surface navigation safety and mine countermeasures. As these systems collected bathymetry data, they would communicate positions back to a Maritime Operations Center (MOC). The future intent is to have all unmanned systems reporting their locations back to the 24/7 CTG 80.7 Command Center.

Rear Adm. Gallaudet said, “A dozen Navy entities participated in the operational demonstration, and we couldn’t be more pleased with the results. We were able to accomplish all of our goals, but mainly we were able to show the world that Naval Oceanography is already a leader in unmanned systems.”

COMNAVMETOCCOM directs and oversees more than 2,500 globally-distributed military and civilian personnel who collect, process and exploit environmental information to assist Fleet and Joint Commanders in all warfare areas to make better decisions faster than the adversary.