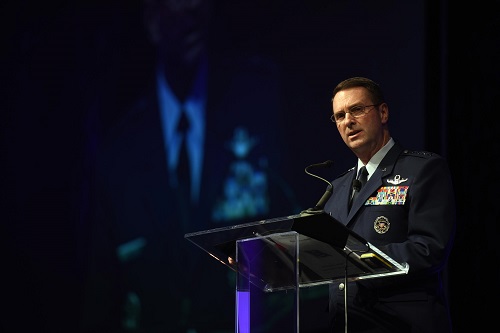 Guard members work in the technology sector in their civilian capacity, the chief of the National Guard Bureau told audience members at the North American International Cyber Summit 2016. Guard members can be found in companies ranging from startups to Google and Microsoft.

Those civilian-acquired skills give Guard members a unique ability to contribute in their military roles. And it’s a two-way street, Lengyel said: “We provide employers the military training and experience our Guardsmen take back to their civilian positions.”

The National Guard is not a new arrival in cyberspace: Fear that coding issues would cause problems after Dec. 31, 1999 – popularly known as the Y2K or millennium bug – prompted the formation of what are now called Defensive Cyberspace Operations Elements in each of the 50 states, three territories and the District of Columbia where the National Guard operates.

Networked technology has created tremendous freedom and opportunity, Lengyel said. “As with anything that is open and free, it presents some real vulnerabilities to those that would exploit them,” he said. “The cyber domain also presents us with some of our greatest challenges from a security perspective.”

“We have to build close relationships, partnerships and bridges with the rest of society when it comes to cyber,” Lengyel said.

The summit where he spoke reflected those types of partnerships: Hosted by Michigan Gov. Rick Snyder, it is a collaborative effort with the National Governors Association, the Department of Homeland Security, private industry, educators, students and local partners that started in 2011.

“We are experts at building enduring partnerships on all levels – international, federal, state and local,” Lengyel said of the National Guard.

“We are active in nearly every facet of cyberspace operations,” Lengyel said. “And we practice our capabilities routinely at all levels.”

Lengyel mentioned recent cyber exercises in the states and with overseas partners, as well as Cyber Guard, a Cyber Command-hosted national exercise that simulates a domestic cyber incident with catastrophic disruption, bringing Guard members together to train with industry partners, active component troops and federal agencies.

Noting that 10,000 National Guard members recently contributed to the response to Hurricane Matthew, Lengyel said, “Just as the National Guard is ready to respond to major hurricanes, we now have contingency plans for major cyber incidents.

“The more our world and society connects via the net, the more we are vulnerable,” Lengyel said. “Cyber warfare is a battle space that will only get more challenging. It’s a battle space available to all – both state and non-state actors. … Staying one step ahead requires cooperation and teamwork.”

“I challenge each of you to think and communicate how we can develop a culture of innovation to secure against those who wish to do us harm,’ he said. “We simply can’t do it without your help.”