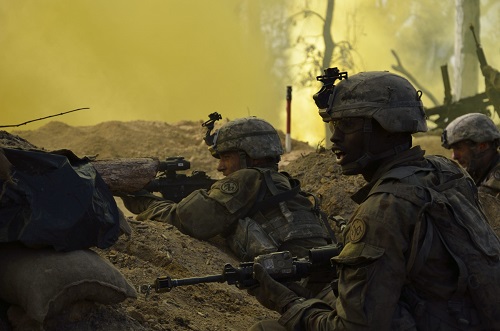 The National Guard Soldiers were attached to the active duty Australian Army brigade playing the opposing force during the exercise.

A key focus of the exercise is to learn how to work together, explained Australian Army Col. Bede Galvin, an exercise controller. “We focus on the high level of interoperability between our two countries,” Galvin said.

“There have been a few communication challenges. Sometimes we’ll say things the Americans don’t necessarily understand, and vice versa,” Galvin said. “Despite that, the integration between the American and Australian air forces has been first rate, and the tactical integration between the soldiers and airmen of the different countries working together has been excellent.”

The exercise was based around a fictitious country being encroached upon by a second country, which is being supported by a third nation, Galvin said.

The New York Soldiers were tasked with establishing blockades and defensive fighting positions in order to defend themselves from the advancing Australian Army’s 3rd Brigade, which was playing the role of the liberating army, better known as the blue force.

The land battle was only a small part of the overall exercise, Galvin said. The battle involved over 190 aircraft and 26 ships, including the supercarrier U.S.S. Ronald Reagan.

The landing was the largest the Australians have conducted — in real life, or in an exercise — since World War II.

The land force battle was “free play”” at the tactical level, which meant there was no scripted outcome to the fight, Galvin said.

“There is tactical direction at the battalion level that’s provided, but we’ve actually released the boundaries of constraint so we don’t actually see a fight about who wins, it’s actually more about the training outcomes we want to generate for all of the training audiences,” he said.

In addition to controlling the exercise, observer/trainers also monitor the training events and reported to commanders on both their assets and shortcomings, Galvin said.

“We conducted offensive and defensive operations and learned to integrate our communications with allied forces,” Makay said.

Some challenges arose but there are a ton of similarities we were able to take advantage of,” Makay said. “The Australian Defense Force is a great service and we’ve been working together for over 100 years in many different theaters of operations.”

The 69th Infantry Regiment completed a rotation at the Joint Readiness Training Center (JRTC) at Fort Polk, Louisiana, last year and was able to build upon their experiences there, Makay said.

“It was beneficial to take the battalion to JRTC, then take those lessons learned and have the opportunity to deploy those lessons and reinforce them,” Makay said. “This experience was a little bit different from JRTC. There was a little bit of a slower operation tempo which gave our fire teams and squads to focus on their field craft and tactical issues and lower level of training.

“I think this was a beneficial and unique opportunity,” Makay continued. “Working with a foreign army or any active duty force brings a level of skills and expertise that our soldiers benefit from.

“It’s one thing to go out as a reserve force and train yourself, but when you partner with an active duty unit you see that level of professionalism, and the relationship we established with the Australians allowed them to teach us and us to teach them,” Makay said. “That’s certainly a benefit that you wouldn’t get at a normal Annual Training.”

The Australians also benefited from training with the Americans, Galvin said.

“The integration with the land force between the U.S. Army — whether it be the National Guard elements supporting the opposing force, or the 1st Brigade, 25th Division who supported the blue force — that tactical integration has been excellent,” Galvin said.

“I’m pleased to say that all of the training activities we have set out to achieve have been accomplished,” he added.