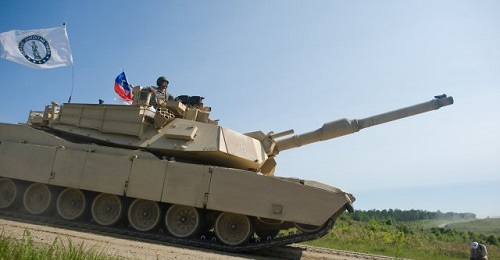 The win came as a surprise to the team, said Spc. Brandon Sinor, loader for the “Old Hickory” crew.

“When they called us up there, it surprised us all. We were nervous, hearts were racing-it was a surreal moment,” said Sinor, whose crew fought off 16 other crews for the title.

Sinor, who competed two years ago with one of his teammates, said the competition was more challenging this year.

“We came in this thinking we may know a little of what’s going to go on, but this year they completely rearranged the competition. They made it 100 times better and 100 times more organized,” said Sinor, who also noted that the PT test in the Georgia heat was a “smoker” and the thunder run in the shoot-off surprised the crew.

The win marks a notable year for the National Guard, with a National Guard team winning the Best Ranger Competition in April and now capturing the Sullivan Cup title in May.

“Together, the Armor School is answering the demand from the Chief to raise the readiness level of the United States Army and everyone involved here at Fort Benning and elsewhere should be very, very proud of what’s gone on here this week,” said Sullivan.

The 2016 competition was the third Sullivan Cup and with each year Sullivan hopes the competition can influence and improve tank gunnery.

“I think within two or three more times (competitions) it will begin to change tank gunnery, certainly in the Army, and it will become more and more competitive,” said Sullivan.