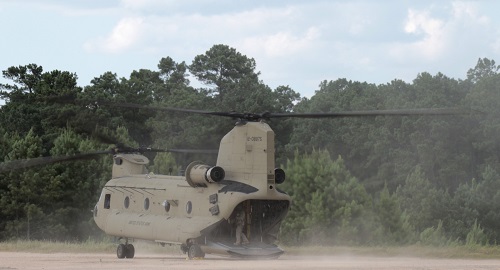 For most aviation units supporting JRTC, their primary focus is moving troops and equipment throughout the training area in support of the units being evaluated. For the aviators and crews of Detachment 1, Company B, 3rd Battalion, 126th Aviation, they’ve added another focus — preparing for an upcoming deployment to Afghanistan.

“Being here at JRTC gives us a great opportunity to test the skills of our aviators and Soldiers and determine their strengths and abilities to handle high pressure positions before our deployment,” explained Cpt. Jesse Cody, the Rochester based aviation detachment commander.

The Rochester-based aviation unit operates CH-47 “Chinook” helicopters, used widely in the Vietnam War and the 1991 Gulf War, as well as Afghanistan and Iraq. They have proven immensely valuable in the mountains of Afghanistan because the twin rotors provide lift at high altitudes and in cold weather.

Nicknamed “Kong,” the Soldiers of Co. B, 3-126th Aviation deployed to Afghanistan twice to support United States forces there. The unit is again preparing to support another overseas deployment in 2017.

“As we get closer to the deployment, we are assigning individual Soldiers and Officers into the specific roles they will perform on deployment, so here they gain crew experience in a combat simulated environment,” explained Staff Sgt. Daniel Herley, a flight engineer and acting 1st Sgt. for the JRTC rotation.

The Soldiers deployed to Afghanistan in 2007 through 2008, and the company was recognized as the Army National Guard aviation unit of the year for 2008 by the Army Aviation Association of America for its accomplishments in Afghanistan, including the unit’s participatiion in the largest air assault operation in that country since 2002.

In 2012 to 13 the Soldiers deployed again to Afghanistan to move troops and supplies across the country.

“This training rotation helps our younger, less experienced Soldiers learn what to expect during our upcoming deployment,” Herley added.

While Detachment 1 is based in Rochester, the other half of the company, who were also here for the training exercise, is part of the Maryland Army National Guard.

“We work closely already and will deploy together, so this is great timing to focus on crew integration between New York and Maryland,” said Cody. “Our expectation is to have pilots from each state in the same cockpit before we leave here.”

The aviators are supporting New York Army National Guard Soldiers of the 27th Infantry Brigade Combat Team and another 2,000 Soldiers from other state Army National Guard units, active Army and Army Reserve troops as they hone their skills and practice integrating combat operations ranging from close combat to artillery and air strikes. 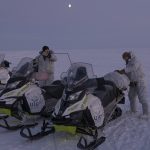