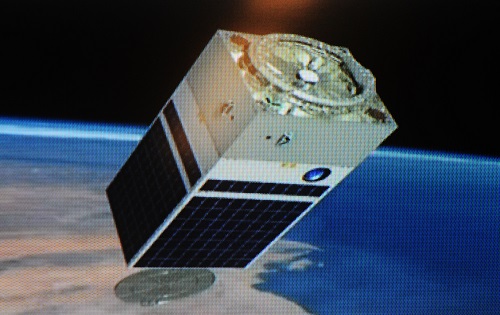 Kestrel Eye, or KE, is an electro-optical nanosatellite being developed by the command. It will improve mission command on the move for a brigade combat team to allow tactical leaders to synchronize action, seize the initiative and maintain near-real-time situational awareness, Dickinson said.

KE is an improvement over older methods because it will provide satellite imagery without the need for U.S.-based relays, he noted.

The nanosatellite is due to launch from Cape Canaveral, Florida, “very soon” as part of the International Space Station cargo resupply mission, he said. Once aboard the ISS, the crew will deploy this small satellite into its orbit. When it is a safe distance from the ISS, the satellite will automatically power up and be ready to receive signals.

A series of tactical exercises will measure the effectiveness of this satellites, he said.

USASMDC/ARSTRAT, in coordination with the U.S. Army Capabilities Integration Center, is leading an effort to develop a multi-domain task force that will address threats in the multi-domain environment, Dickinson said.

The task force will integrate space effects at the tactical level to support maneuver elements of the operational Army, he said. They will be dispersed, very agile, lethal and networked.

Currently, USASMDC/ARSTRAT provides satellite support and missile warning to the task force. Future requirements will dictate innovative and creative solutions and new technologies will be incorporated, he said.

The task force is currently in the growth phase, and Dickinson mentioned that the chief of staff of the Army said it will have around 1,500 Soldiers when it reaches full strength.

There is a lot of congressional and Department of Defense interest in high-energy laser weapons, Dickinson noted.

The command participates in maneuver fires integration experiments with the Stryker-based mobile experimental 5-kilowatt laser, he said. The advantage with this type of laser is that engineers are not required to operate it, so Soldiers can be trained quickly.

Soldiers in the Stryker vehicle were able to take out UASs, after just two weeks of training, Dickinson said.

There’s also a 10 kW laser that has been highly successful in testing, he added.

In fiscal year 2018, the Army will begin testing a 50 kW laser, which will be a key component of a system known as the High-Energy Laser Tactical Vehicle Demonstrator. These advanced-laser systems can be integrated into a more rugged and mobile platform compatible with the Army’s Battle Management Network, he explained.

By 2022, he noted that the Army hopes to test a 100 kW laser, adding that an incremental approach in power is part of the experimental design so that results can inform the next level of power increase.

The Army is also in the planning stages for a high-energy center of excellence at Redstone Arsenal, he said.

Bigger lasers have the advantages of greater range, more power and therefore greater lethality and better beam control. Therefore, helicopters and fixed-wing aircraft can potentially be targeted, according to Dickinson.

In September 2018, NATO will host a Nimble Titan 18 senior leader forum. The forum will be an opportunity to highlight the benefits Nimble Titan provides, he said.

A recent National Air and Space Intelligence Center report stated that China and Iran, along with North Korea, have been developing new, medium- and intermediate-range ballistic missiles, many of which are capable of being armed with non-conventional warheads, Dickinson said.

“Our adversaries continue to test and develop their space and missile defense capabilities,” he said. North Korea test-launched its first intercontinental ballistic missile July 4, for example. “These activities increasingly place the U.S. and its allies at risk as their capacities grow, and the consequences are grave,” he said, highlighting the need for continued U.S. development and research in missile programs.

USASMDC/ARSTRAT “is poised to deter, defend and defeat these threats,” he said.