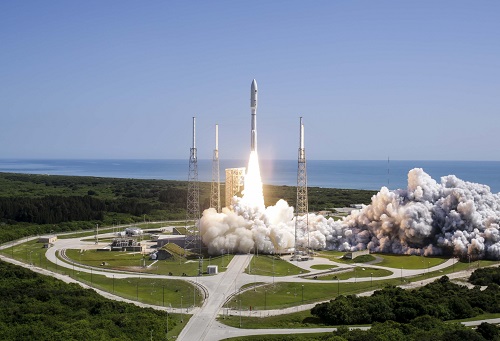 AUGUST 3, 2016, SAN DIEGO (NNS) – Evaluation of the fifth Mobile User Objective System (MUOS) satellite determined that the satellite experienced a failure of the orbit raising propulsion system during a transfer maneuver on June 29. The transfer maneuver was designed to take the satellite from its initial elliptical launch orbit to its final circular geosynchronous orbit. This anomaly resulted in the transfer maneuver being halted. The MUOS 5 satellite is currently stable, safe and under positive control.

The satellite, which successfully launched June 24, was projected to reach its geosynchronous orbit and enter its test location 22,000 miles above Hawaii by July 3. The satellite remains in a stable intermediate orbit since experiencing the anomaly. The MUOS team is continuing to evaluate the situation, considering alternate orbit adjustment options, calculating mission impact and investigating all options before proceeding.

MUOS-5 was launched as an on-orbit spare to provide immediate redundancy to the MUOS constellation, and the delay in reaching its test location has no impact upon current legacy or Wideband Code Division Multiple Access (WCDMA) satellite communications operations. MUOS-1 through MUOS-4 are in orbit and are currently supporting operations via their legacy payloads, providing UHF satellite communications for the DoD.

MUOS is a communications system consisting of five satellites, four ground stations across the globe, a network management system and an integrated WCDMA waveform. The first four MUOS satellites are already operational via their legacy payloads, providing UHF satellite communications for the DoD and mitigating potential gaps in UHF communications capabilities. The system’s WCDMA capability employs third-generation cellular technology adapted for military SATCOM and has been approved for Early Combatant Commander Use.