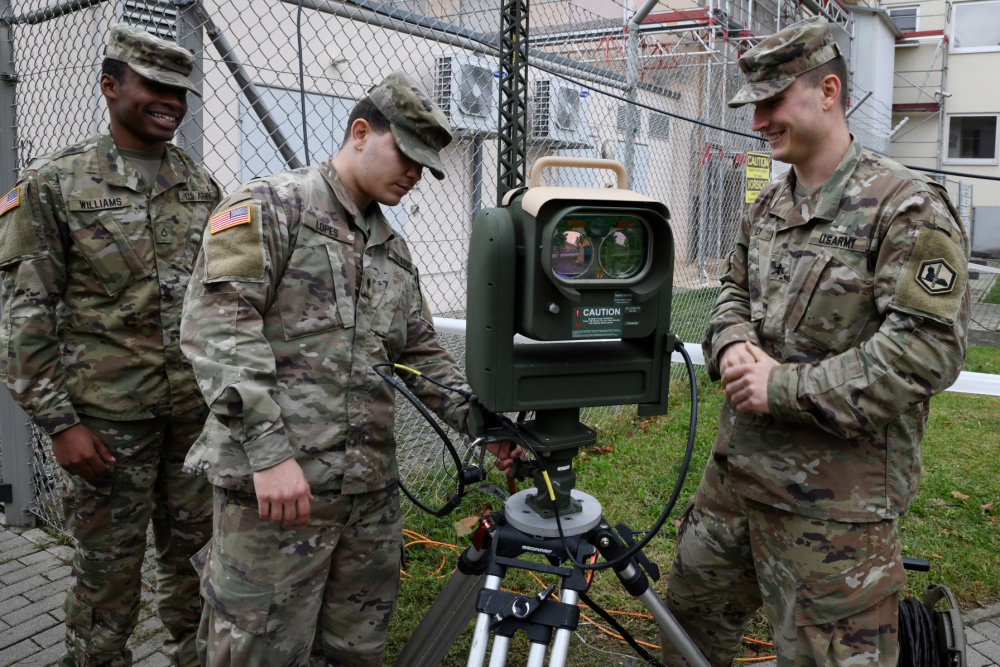 Light Fidelity, or Lif-Fi, utilizes light-emitting diode bulbs to form a wireless communication network similar to Wi-Fi. Essentially, it allows its user to maintain a wireless connection via an LED bulb and not through a radio frequency, Wi-Fi- signal.

“Normally I’d be at a workstation connected through a cable, and I’m stuck here because I can’t remove my cable and stay connected,” said Army Chief Warrant Officer 3 Brian Czolada, 66th MI’s S-1 information services technician, during a demonstration. “But using this device, I can move around the room and I can transition from one access-point over to another access-point and stay connected and stay communicating the whole time.”

66th MI tested the technology’s capabilities in a tactical operations center on Clay Kaserne by maintaining a video teleconference and steaming a number of movies from 2nd Signal’s TOC located at Wackernheim, across the Rhine River, approximately ten miles away.

Because of its configuration’s simplicity, Czolada explained that one of the benefits to Li-Fi is its mobility, increasing strategic and tactical readiness capabilities by allowing users to quickly deploy and communicate.

“If we’re going to be mobile, and moving from location to location, [with Li-Fi] we can pack-up, move and setup much faster than we could before,” Czolada said.

Furthermore, because having a device connected via Wi-Fi signal would allow it to retain connectivity outside the TOC, Czolada said Li-Fi ensures that devices need to be secured within the tent, under the LED bulb, to stay connected.

“Just like at your house, your Wi-Fi signal travels through your walls,” Czolada said. “Using Li-Fi, if you cannot see the light, you can’t connect to this network. It’s secured more than a Wi-Fi connection would be.”

At the end of the ten-day endeavor, Army Chief Warrant Officer 5 Andrew J. Foreman, the USAREUR G-6 chief technology officer, wrote in the exercise’s white paper that, because of this success, “The Department of Defense and the Army are at a major transitional crossroads.”

“The Army has not experienced the same type of transition in over a century, when the warfighter transitioned from horse to trucks and semaphore signalling to phones on the battlefield,” Foreman wrote.

Likewise, Army Spc. Chadwick Deem, a 66th MI human intelligence collector, said he was amazed at how fast and easy it was to set up operations, touching on his prior experiences working with wires that would usually take much longer to set up in a tactical environment.

“It leaps and bounds ahead of anything we’ve seen so far and I feel like it’s going to make everyone’s lives so much easier,” Deem said.

A first-time user of Li-Fi, Deem was tasked with making sure the movies and VTC were still streaming from Wackernheim. He said that, despite the distance, the media retained its quality as if it were being streamed off of a Blu-ray player.

“It’s impressive.” Deem said. “I came into this not knowing exactly what it was, with no expectations and I’ve been blown away.”