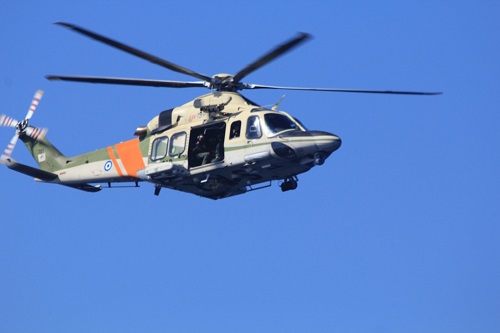 The purpose of the exercise was to increase response capabilities of Cypriot emergency personnel and rescue units and to enhance interoperability with the U.S. Navy to conduct these types of missions within the rescue region of the Republic of Cyprus and Eastern Mediterranean Sea.

“The SAR exercise conducted between the Joint Rescue Coordination Center of the Republic of Cyprus and USS Mount Whitney demonstrated an increased readiness for effective response in SAR and other humanitarian assistance missions. It was a pleasure to cooperate with the Cypriot rescue unit personnel.” – Capt. Carlos Sardiello, USS Mount Whitney (LCC 20) commanding officer.

“I appreciated the opportunity to work closely with the Cypriot military, police, and coast guard units. Coordination was great, and they were very professional and courteous. I am confident that in a real-world emergency, we could work together to save the lives. I hope to work with them again in the future.” – Lt. Jean Paul Bertram, USS Mount Whitney (LCC 20)

Mount Whitney provided the training equipment by dropping human replicas into the water as the ship pulled out of port. Personnel involved in the exercise practiced MEDEVAC coordination procedures, recovery procedures using a helicopter, and combined communications to locate and track missing persons at sea.

Mount Whitney is currently underway conducting unit-level training, performing duties as the fleet command and control ship, and working to strengthen ties with partners and allies in the region.

Mount Whitney, forward deployed to Gaeta, Italy, operates with a combined crew of U.S. Navy Sailors and Military Sealift Command civil service mariners. The civil service mariners perform navigation, deck, engineering and supply service operations, while military personnel support communications, weapons systems and security. It is one of only two seaborne Joint Command Platforms in the U.S. Navy, both of which are forward deployed.

U.S. 6th Fleet, headquartered in Naples, Italy, conducts the full spectrum of joint and naval operations, often in concert with allied, joint, and interagency partners, in order to advance U.S. national interests and security and stability in Europe and Africa.