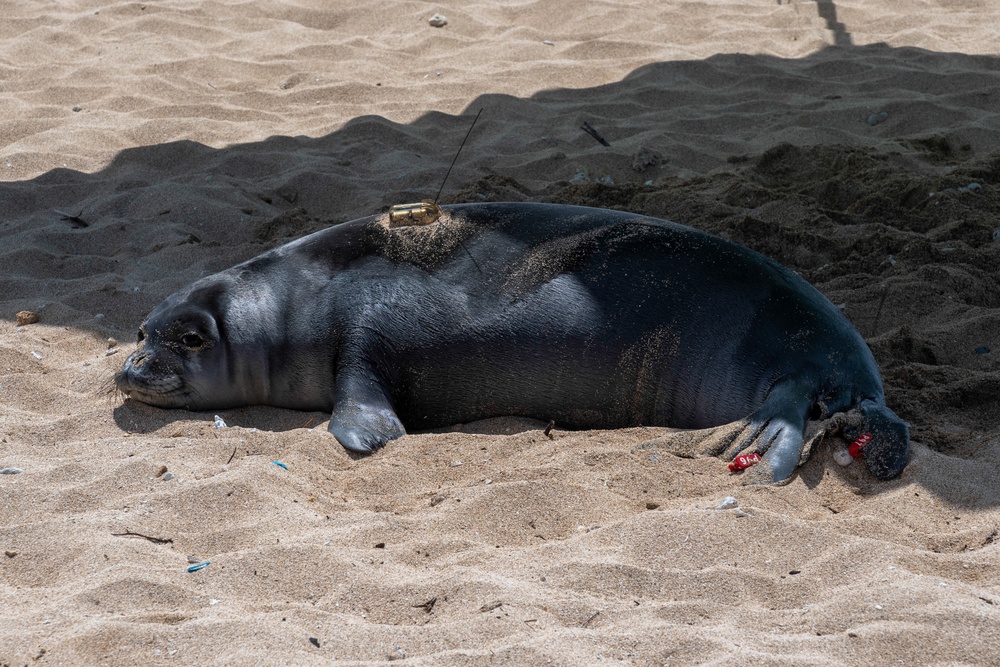 SEPTEMBER 4, 2021 – In June 2021, the Hawaiian monk seal pup Lōliʻi was transferred to Marine Corps Base Hawaii for protection from crowds on Waikiki beach. Although a baby seal may sound like a great tourist attraction, the conservation and protection of marine wildlife is important, and that includes minimizing the chances of young, curious monk seals becoming habituated to people. The natural wildlife and landscape is a precious resource to both MCBH and the people of Hawaii, and the installation takes seriously their stewardship role of protecting these resources.

“What happens after about six weeks of nursing is the mother seal abruptly leaves,” said Angela Amlin, a Hawaiian Monk Seal Recovery Coordinator for the National Oceanic and Atmospheric Administration. “Then you have a young monk seal pup on a beach by itself, and it’s in this phase where it’s learning a lot.”

In a heavily populated environment, such as the crowds in Waikiki, a seal learns to be social with not only other seals, but humans as well. Young, recently weaned pups, like Lōliʻi, can be particularly curious.

“This is really concerning because once they get bigger, conditioned seals can end up injuring people seriously,” said Amlin.

“They can become conditioned, and can even attempt to play and engage in other seal social behavior with people.” Angela Amlin, Hawaiian Monk Seal Recovery Coordinator for the NO and AA

A seal’s ability to survive in the wild can be negatively impacted by its social engagement with humans.

“We were really concerned about keeping both Lōliʻi safe in the wild and keeping the public safe,” said Amlin. “We know from past experiences that if we move seals at this young age, they do just as well as seals that remain on their natal beach.”

Relocating a monk seal is serious business. NOAA extensively assesses risks to the seal when evaluating relocation and potential relocation sites. Some of these risks include the probability of human interaction, fishing hooks and nets, and off-leash pets.

“In May we got a call from NOAA,” said Lance Bookless, the senior natural resources manager for MCBH Environmental Compliance and Protection Division. “They asked us if we would be willing to release the pup here, based on their risk assessment.”

On June 10, 2021, Lōliʻi was transported to MCBH, and released on a wildlife protected beach.

“[NOAA] collected blood and tissue samples; they attached a GPS transmitter to the seal; and they put identifying tags on its two flippers,” said Bookless.

The importance of tracking these seals is to ensure that they remain safe, despite the dangers around them.

“They are an extremely endangered marine mammal. There’s only about fourteen-hundred of them left in the wild,” said Bookless. “They estimate roughly three hundred of them inhabit the main Hawaiian Islands.”

With efforts like this relocation, there is hope for a brighter future for the Hawaiian monk seal.

“The whole purpose of trying to protect them is so they can rebuild the population, and someday they may be able to be taken off the endangered list,” said Bookless.

Partnering with organizations like NOAA is important to MCBH’s mission of protecting and preserving the wildlife of Hawaii.

As a reminder, please view Hawaii wildlife responsibly. NOAA recommends and MCBH requires staying at least 50 feet away from monk seals—both on land and in water. Please report sightings of Hawaiian monk seals or injured marine mammals and sea turtles to the NOAA Marine Wildlife hotline: 888-256-9840.