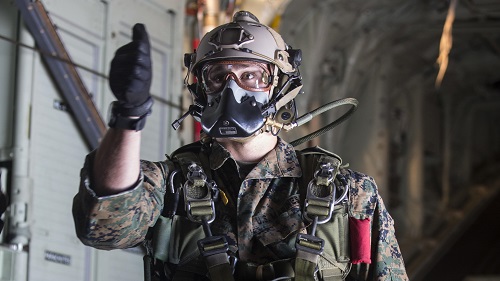 APRIL 26, 2017, OKINAWA, Japan – For the first time in history, the military freefall jumpmaster course was delivered outside of the continental United States. Hosted by the U.S. Marines Corps 3rd Reconnaissance Battalion and administered by a Mobile Training Team, the course qualified 27 Marines, Soldiers and Airmen as military freefall jumpmasters in Okinawa, Friday, April 21, 2017.

“Military freefall is done with the end goal of being able to use that skillset to practically insert into any enemy territory,” said U.S. Marine Corps Master Sgt. Clifford E. Moffitt, staff non-commissioned officer in charge of the Military Freefall Jumpmaster Detachment aboard U.S. Army John F. Kennedy Special Warfare Center and School in Yuma, Arizona.

“Within the operational forces there was not enough to sustain or grow this capability [abroad]. A decision was reached a couple years ago and we began, myself, and other Marines out of the detachment, to execute military freefall jumpmaster Mobile Training Teams.”

According to Moffitt, the MTT is composed of two Marines and two Department of Defense contractors. In fiscal year 2016, they executed three military freefall jumpmaster courses in the continental United States. This iteration marks the first of four scheduled courses in fiscal year 2017 and the first to be held overseas.

“This is really big to us with the commandant’s message of Special Operations Forces interoperability; however, this is nothing new to Marine reconnaissance,” said Master Gunnery Sgt. Mariota Pa’u, the operations chief with 3rd Reconnaissance Battalion.

“You are the focal point in regards to ensuring that the desired impact point, where you are dropping your Marines, Sailors and Soldiers, is correct because what you do hinges on mission success,” stated Pa’u.

The military freefall jumpmaster course provides an ideal venue to aggregate joint special forces in Okinawa with the desired end state to hone operational readiness across all lines of services.

“It is going to present all of the SOF entities located here on Okinawa as a unified front and now if we do bilateral training with other countries we are all on the same page as far as the Army, Navy, Marine Corps and Air Force and we can portray that to the host nation we are working with,” said U.S. Marine Corps Staff Sgt. Joshua Hayes, the current operations staff non-commissioned officer with Force Reconnaissance Company, III Marine Expeditionary Force.

“Mission success rides on your ability to get your team inserted. The jump is just getting you to work; the mission is as soon as you hit the deck and move forward.”