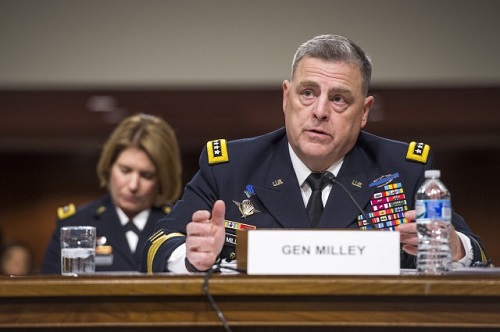 WASHINGTON (Army News Service, April 8, 2016) – While manning and equipping the Army are vitally important to winning the nation’s wars, and needs to be addressed, the Army’s No. 1 current priority is readiness, said Chief of Staff of the Army Gen. Mark A. Milley.

All brigade combat teams should be going to a CTC, he said. And the key to success at the CTC is home-station preparatory training, he continued.

It’s imperative that the National Guard gets CTC training “because of the capacity issue of the regular Army” to deal with threats, Milley said, April 7, while testifying before the Senate Armed Services Committee.

This year there will be two CTC rotations with the Guard, he said and “we’re trying to increase that to four.”

Home-station training would better prepare Soldiers for the high-end type combined arms training at the CTCs, he said.

To sustain current operations and to mitigate the risk of deploying an unready force, the Army will continue to prioritize and fully fund readiness over end-strength, modernization and infrastructure, the chief said.

“This is not an easy choice,” he added.

Current and future threats drive the need for readiness as the top priority, the chief said. Those threats pose a risk to the Army and the nation.

One senator wanted to know exactly how much of a risk the readiness challenge posed to national security.

The current state of the Army is at “high military risk,” he said.

While the Army has sufficient capacity, capability and readiness to fight counterinsurgency and counterterrorism, high military risk refers specifically to emerging threats with regard to the time it takes to execute the tasks and the cost in terms of casualties, he explained.

Asked to substantiate that risk, Milley said only about a third of Army combat formations, combat support and combat service support are in a readiness status that is “ready to go.”

Spinning up the other two-thirds for a crisis, he said, “would require some amount of time to bring them up to a satisfactory readiness status.”

The focus on readiness does not minimize the importance of modernization, Milley said. “We ask for your support in modernization in five, key, limited areas: aviation, command and control networks, integrated air and missile defense, combat vehicles and the emerging threats program.”

The Army must also be capable of meeting a wide variety of threats under varying conditions anywhere on Earth, Milley concluded.

“Our challenge today is to sustain the counterterrorist and counterinsurgency capabilities that we’ve developed with a high degree of proficiency over the last 15 years, while simultaneously rebuilding the capability to win in ground combat against higher-end threats such as Russia, China, North Korea and Iran,” he said. “We can wish away these threats, but we’d be very foolish as a nation to do so.”