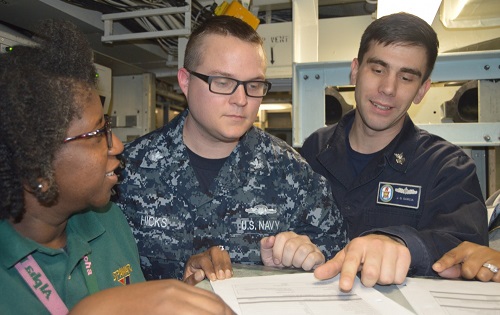 Milius was the first ship to begin an install of the Consolidated Afloat Networks and Enterprise Services (CANES) and the second to finish the installation in spring 2014.

“Milius has set a new precedence for the waterfront when it comes to CANES upkeep and overall SOT participation,” said Heggem. “SOTs are opportunities for SPAWAR scientists, engineers, and technical experts to come on board and provide training for Sailors. A SOT is not an inspection, but rather an integrated test to identify issues that may exist and work as a team to resolve issues across the C4I spectrum of equipment. For those issues we are not able to fix during the week of testing, we provide a clear path ahead for the ship or SPAWAR to resolve.”

Ashley Alexander, a scientist assigned to SPAWAR Systems Center (SSC) Pacific, trained Milius Sailors during the SOT on the various intelligence systems on board.

“This is the sixth SOT I have supported,” said Alexander. “The Sailors serving on Milius wanted to train and learn. I felt valued as a subject matter expert because they listened and asked good questions. They taught me more about what they do to support the electronic key management system program on board and how their role impacts the overall mission of the ship. Three years ago when I finished graduate school and joined the SPAWAR team, I did not think that I would have the opportunity to serve alongside Sailors on warships and train them on the systems that support upcoming deployments and missions. It’s a very rewarding job!”

Lt. Cmdr. Allison Easton, assigned to FRD 200, was the officer in charge for Milius’ SOT and expressed she was very impressed with the performance of the Milius crew throughout the week.

“From the ‘get-go’ the Sailors showcased an unmatched pride in their ship,” said Easton. “I was previously stationed on Milius a few tours ago, so it was surreal to come back on board and experience the same energy and heart that I remembered during my assignment. Having this connection with Milius made me want to see the crew succeed, and they surpassed expectations.”

“My younger, less experienced Sailors really benefited from the SOT,” said Garcia. “Not only did SPAWAR provide invaluable training by answering questions and breaking out the tech manuals, but they ‘showed’ Sailors how to upgrade and upkeep communication systems on the ship. In my opinion, a week was just not long enough. I know my Sailors would have appreciated even more hands-on training.”

Garcia also stressed the main training which occurred during the SOT was more focused on intelligence equipment and Automated Digital Network Services (ADNS). Although there was an opportunity to train on CANES, it was not as necessary because Milius Sailors have gone to other ships for cross-training opportunities.

“Shipboard leadership has been incredibly proactive in ensuring the crew’s proficiency on CANES,” Garcia said. “We have had very few issues with CANES since the install, and from my perspective it has to do with the support from other ships on the waterfront, as well as SPAWAR’s involvement.”

During the SOT outbrief, Cmdr. Gilbert “Gil” Ayan, Milius commanding officer, expressed his gratitude for the teamwork he witnessed throughout the week.

“Conducting a SOT during this phase of the ship’s life and following the installation of CANES has proven incredibly helpful for my Sailors serving in C4I-related fields,” said Ayan. “The military and civilian team at SPAWAR integrated with my crew this week to identify the strengths and minor discrepancies in our systems. We have been able to hold several conversations on how we can make maintenance, training, and upkeep even better as we move into the future and support various mission sets across the fleet.”

Upon completion of the SOT, SPAWAR provided ship’s force with a C4I SOT sustainability documentation package providing an overview of the ship’s overall readiness and sustainment of the C4I suite. This document serves as a reference tool for ship’s force to ensure greater proficiency in maintaining readiness in support of designated operational mission areas such as anti-submarine warfare, anti-air warfare, surface warfare, ballistic missile defense, and various C4I capabilities.

SPAWAR is the Navy acquisition command which develops, delivers, and sustains advanced information warfare capabilities for our warfighters. SPAWAR, along with its system centers, space field activity, and its partnership with three program executive offices, provides the hardware and software needed to execute Navy missions. With nearly 10,000 active-duty military and civilian professionals located around the world and close to the fleet, SPAWAR is at the forefront of research, engineering, and acquisition, keeping U.S. forces connected around the globe.