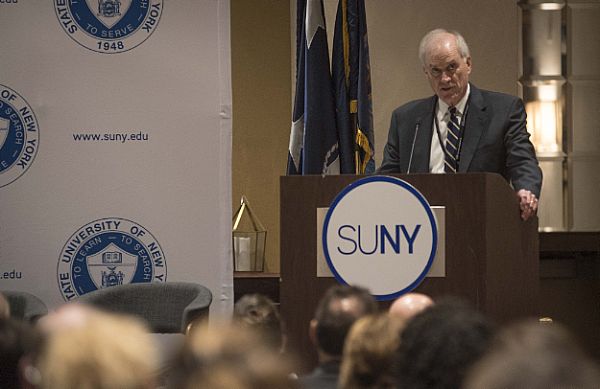 The Department of the Navy (DoN) co-hosted its first Regional Discussion on Sexual Assault and Sexual Harassment at America’s Colleges, Universities and Service Academies with the State University of New York (SUNY) at the NYC Marriott East Side and the SUNY Global Center. More than 280 attendees included regional experts at providing safe learning and working environments for students and Soldiers, Sailors, Marines and Airmen.

Secretary of the Navy Richard V. Spencer, who opened the conference with SUNY Chancellor Kristina Johnson, said sharing military assault and harassment data with colleges and universities is the first salvo in finding a solution to eliminate these destructive behaviors.

“This is an issue that I am passionate about, and I have made a commitment that I will do everything that we can on my watch to start the eradication of this,” he said. “This is a huge co-generational issue that we should not expect to be solved overnight; we should expect to go after this with great expedition, great trepidation, courage, energy and thinking outside the box.”

Johnson said the exchange of ideas among institutions of higher education and subject-matter experts is necessary to drive down incidents of sexual assault and sexual harassment. “At SUNY we have developed a comprehensive policy agenda that includes providing cutting-edge training to enhance the knowledge and skills of our students, faculty and staff,” she said.

The four superintendents of the Army, Navy, Air Force and Coast Guard military academies joined Rear Adm. Michael Alfultis, president of the SUNY Maritime College, in a special panel discussion on their views on preventing sexual assault and harassment and the effectiveness of current programs.

Vice Adm. Sean Buck, superintendent of the Naval Academy, said current efforts such as midshipmen surveys must be enhanced by commitments from top academy leaders as well as from their peers. “As we show our students that we have a very inclusive and safe environment where they’re treated with dignity and respect, which they may not have been treated [with] before, they begin to feel like they can open up and trust their leadership,” said Buck.

University and military students also provided feedback to the leaders. Master Chief Petty Officer of the Navy Russell L. Smith moderated a panel of students who answered audience questions and discussed their perspectives and role in effective assault-prevention programs.

Midshipman 1st Class Kody Rulofson said the educational side of sexual assault and harassment is crucial to his generation, in particular the way information is disseminated through the ranks. More transparency in not only the results of surveys and data but also in the processes cadets or midshipmen can use to get through these difficult situations will create greater trust in leadership, he said.

“This is a serious subject, but talking about it helps. There is an undercurrent of hope and confidence here,” he said. “I am inspired by a sense of purpose as we come together to learn from one another, to take new ideas toward our shared goal of eliminating sexual assault. Changing culture takes time and commitment, so we must stay with it.”

The conference follows the inaugural National Discussion, held at the U.S. Naval Academy in April. The U.S. Army will host the second annual National Discussion on Sexual Assault and Sexual Harassment at West Point April 1-2, 2020. The Department of the Navy plans to host discussions at other locations in the next year, including in the Southwest and the Midwest.

For further information, visit www.navy.mil, www.facebook.com/usnavy, or www.twitter.com/usnavy. Much of the NYC Regional Discussion was recorded, and can be viewed at https://navylive.dodlive.mil/2019/08/23/department-of-navy-suny-team-up-against-sexual-assault-sexual-harassment/.