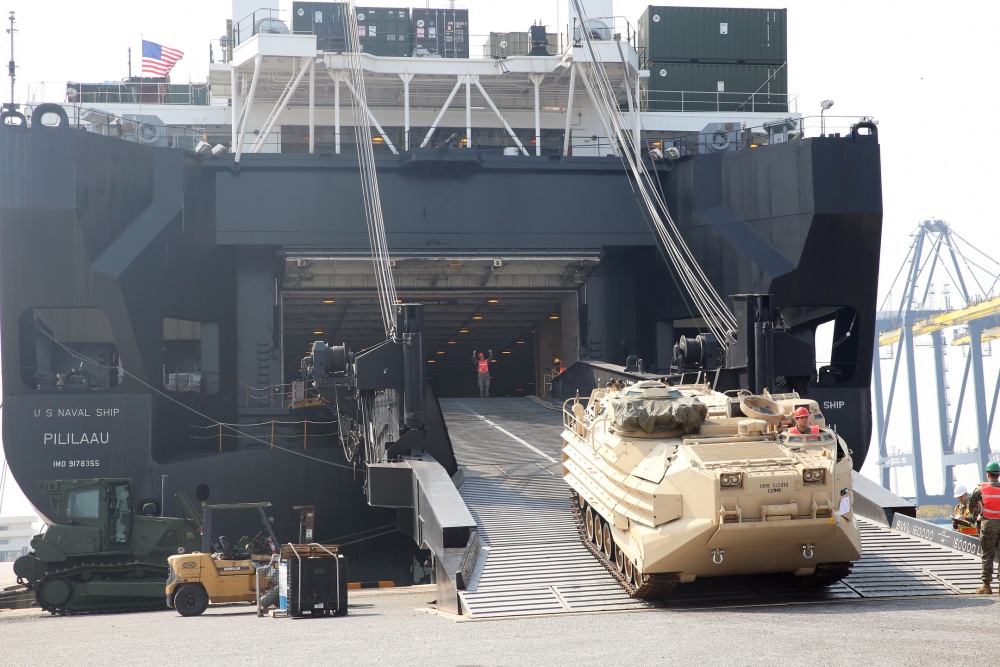 Cobra Gold 2018 is a Thailand and United States co-sponsored exercise conducted annually in the Kingdom of Thailand.

The Pililaau, a large, medium-speed, roll-on/roll-off (LMSR) platform, was the first of three ships to arrive and offload equipment for CG18. The other vessels were operated under a U.S. Army Pacific contract to deliver additional CG18 equipment.

“We originated from Saipan, travelled to Okinawa (Japan) and picked up the Offload Preparation Party (OPP) Marines; then travelled to Thailand for the discharge of equipment,” said civilian mariner Capt. Thomas P. Madden, master of the USNS Pililaau. Over the course of about three days, the OPP Marines and ship’s crew discharged about 265 pieces of gear from the Pililaau.

The USNS Pililaau is part of Maritime Prepositioning Ships Squadron THREE (MPSRON-3), which consists of a fleet of government-owned ships operated by MSC and is based in the Guam-Saipan area of the Western Pacific Ocean.

In addition, a second fleet, MPSRON-2 based out of Diego Garcia in the Indian Ocean, combine to deliver a strategic power-projection capability for the Marine Corps, Army and Air Force, known as the Maritime Prepositioning Force (MPF).

“Put together a few of these ships and you can sustain 15-18 thousand Marines for 30 days. Everything from fuel, food, water, the whole nine yards,” said Madden. “With this program, your footprint is a lot less.”

Aside from the common pier-side offloads, the Pililaau can also function during unconventional logistics operations such as in a seabasing scenario when cargo is discharged from ship-to-shore while at sea. In a seabasing operation, cargo is transferred offshore through an in-stream offload. Off-loaded equipment and supplies are then connected with the Marines and Sailors staged at nearby land bases.

“It’s terrific if you can come into a port to offload cargo, but if those ports are contested or not available, these ships have the capability to anchor off and discharge cargo,” said Madden. “By marrying up with an ESD (expeditionary transfer dock) and LCACs (landing craft air cushions), we’re able to do a little bit more over-the-horizon logistics and discharge cargo at sea.”

The MPF is scalable to meet the needs of the geographical combatant commanders, or can support exercises such as CG18 with one LMSR.

However, during CG18 only select items were required for the exercise while some of it lay deep in the cargo decks of the Pililaau.

“This involved an offload and backload of a number of (additional) vehicles in order to get to the specific items that the Marines needed,” said Lt. j.g. Will Contarino, supply officer, MPSRON-3. As a result, the offload took the OPP three days to complete.

Contarino is serving as the MPSRON-3 liaison officer during Cobra Gold. The MPSRON-3 personnel represents MSC as the link between the ship’s crew and the Marines.

At the conclusion of the discharge operation, the Pililaau moved to a site off the coast of Thailand and will remain there until the completion of CG18. The ship will then return to port and reload the equipment prior to embarking on their next assignment.

Exercise Cobra Gold, in its 37th iteration, is designed to advance regional security and ensure effective responses to regional crises by bringing together a robust multinational force to address shared goals and security commitments in the Indo-Asia-Pacific region.