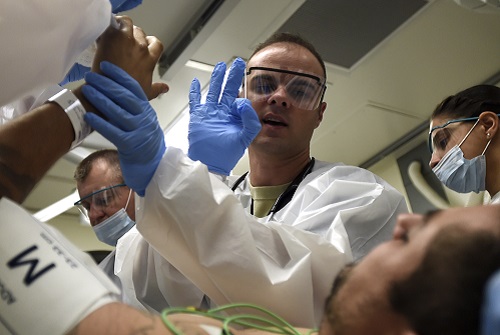 OCTOBER 4, 2016, JOINT BASE SAN ANTONIO-LACKLAND, Texas (AFNS) – “Trauma team to the trauma room; trauma team to the trauma room,” were the words uttered over the public address system at the San Antonio Military Medical Center’s Emergency Department. Words letting medics know of a patient’s impending arrival. In less than 15 minutes, a team of Airmen, Soldiers, civilians and contractors donned their medical attire in preparation to save a life.

One person in an emergency department can’t save lives alone, according to Col. (Dr.) Mark Antonacci, an emergency physician with the 959th Medical Group and chief of the SAMMC Emergency Department, it’s a team effort.

“To me, it’s the satisfaction of working together as a team. That’s what it’s all about saving lives and helping those in need,” Antonacci said.

Located on nearby Joint Base San Antonio-Fort Sam Houston, Texas, the SAMMC Emergency Department, with its integrated medical staff of Air Force and Army personnel, treats roughly 200 patients a day.

“The tempo is always high speed and you are always kept on your toes,” said Staff Sgt. Amanda Orvis, a 959th MDG medical technician and NCO in charge of operations at the emergency department.

“Saving a life is a feeling unlike anything else. Knowing that you not only saved a life but also helped make the family members’ lives better, it’s an unexplainable feeling,” Orvis said.

As the only Level 1 Trauma Center in the Defense Department, the medical facility is equipped and staffed to provide care for patients suffering from major traumatic injuries such as falls, motor vehicle collisions or gunshot wounds. The facility is capable of providing total care for every aspect of injury – from prevention through rehabilitation.

Serving 20 counties in the Texas region, Level 1 treatment at the emergency department is unmatched by any other facility in the DOD. By agreement with the city of San Antonio, access to trauma care is available to local citizens.

“We are the first line of care for the majority of the community. Setting the standard for what care is going to be like throughout the rest of their stay is the emergency department’s goal,” Orvis said.