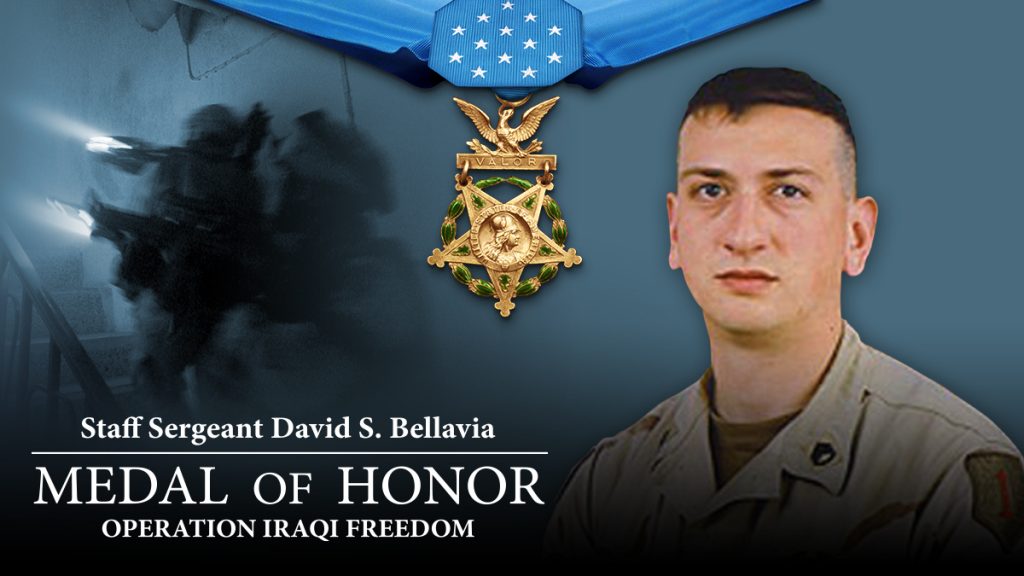 JUNE 25, 2019 – Former Staff Sgt. David G. Bellavia is being awarded the Medal of Honor, the nation’s highest award of valor, for his combat actions while serving as a squad leader in support of Operation Phantom Fury in Fallujah, Iraq on Nov. 10, 2004, during Operation Iraqi Freedom.

The President of the United States will present this award to Bellavia at a White House Ceremony on June 25, 2019 at 3:30 p.m. ET. Bellavia is the first living Medal of Honor recipient for actions during Operation Iraqi Freedom.

Bellavia was previously recognized for his bravery by being awarded the Silver Star, the third-highest personal decoration for valor in combat. The Army reviewed and upgraded this award to a Medal of Honor to recognize his gallantry and heroism.

To tell Bellavia’s heroic story, the Office of the Chief of Public Affairs has created a microsite that includes his biography and videos about his experience.

In addition to the ceremony at the White House, DOD and Army senior leaders will recognize Bellavia during a Hall of Heroes induction ceremony, at the Pentagon, scheduled for 2:00 p.m. on Wednesday, June 26. The ceremony will be live-streamed from Bellavia’s Medal of Honor microsite.

The Army’s greatest assets are its people – the finest men and women the nation has to offer. The Army’s commitment to the brave men and women does not stop when they transition from the Army uniform.

Former Staff Sgt. Bellavia’s actions stand as a testament to those who put everything on the line to defeat the enemy and keep each other safe and alive on the battlefield. Bellavia’s heroism at the risk of life was above and-beyond the call of duty. The Army is proud to recognize Bellavia’s professionalism, service and sacrifice in full view of a new generation.

Provided by the Office of the Chief of Public Affairs