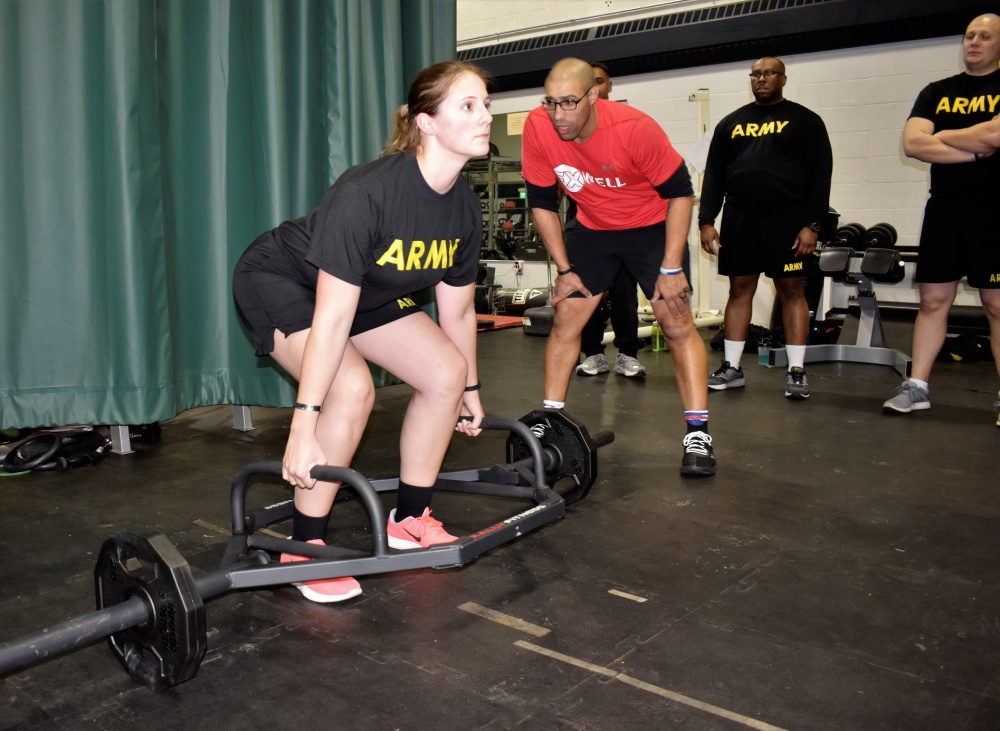 Called ‘Fit to Serve,’ the voluntary program coaches Soldiers in fitness and nutrition, offers technology to track physical activity and sleep routines, and provides physical therapy resources with a focus on overall health wellness and resiliency.

“Anticipating the new Army fitness test, we are taking an extra step now to not only get our troops physically prepared for the dynamic events it brings, but also to build-up their confidence in themselves to overcome unforeseen challenges that may exist,” said Army Maj. Michael Bryant, the battalion commander.

The program is divided into stages that include setting individual fitness and health goals, assessing lifestyle behaviors, participating in virtual coaching and completing a variety of fitness programs and challenges.

The program was introduced to Army Sgt. Fatai Emiabata, a section leader within the battalion, in conversation with a tactical fitness specialist during a physical therapy session.

“I needed to find other ways to help my Soldiers get in better physical and mental shape for when we are called to mobilize domestically or deploy overseas,” Emiabata said. “This struck me as a great way to make that happen, so I took it to my leadership.”

From that start, others helped Emiabata build the program within the 629th, including Army 2nd Lt. Delvon Anderson, an intel officer and Army master fitness instructor in the battalion who also works as a personal trainer in his civilian life.

“Some Soldiers start training for today’s fitness test about 30-days beforehand because it’s just the push-ups, sit-ups, and run,” said Anderson. “You can’t do that with the new fitness test given it’s a whole integration of different physical aspects such as stability, coordination, and balance.”

Bryant added that the program not only helps Soldiers during drill weekends, but also when out of uniform in civilian life.

“The biggest thing for me is having a family-feel network outside of drill and challenging one another to succeed while learning meaningful life-lessons that’s more than just passing the fitness test,” said Bryant.

So far the program has been successful, said Bryant, and there are plans to expand it to other units for others to take advantage of the many resources it provides.

The Army’s current physical fitness test has three main events that has to be completed in two hours — sit-ups, push-ups and a two-mile run.

The ACFT is a six-event test that is age- and gender-neutral and designed to provide Soldiers with an assessment of their physical fitness and help them maintain a high level of fitness while ensuring they are capable of handling physically demanding combat situations. It features six events to complete in 50 minutes; strength dead-lift; standing power throw; hand release push-up; sprint, drag and carry; leg tuck; and a two-mile run.

“Fit to Serve takes the holistic approach to help our soldiers adjust to the new workouts that incorporate power and strength; setting them up for success as we transition to the ACFT,” said Anderson.