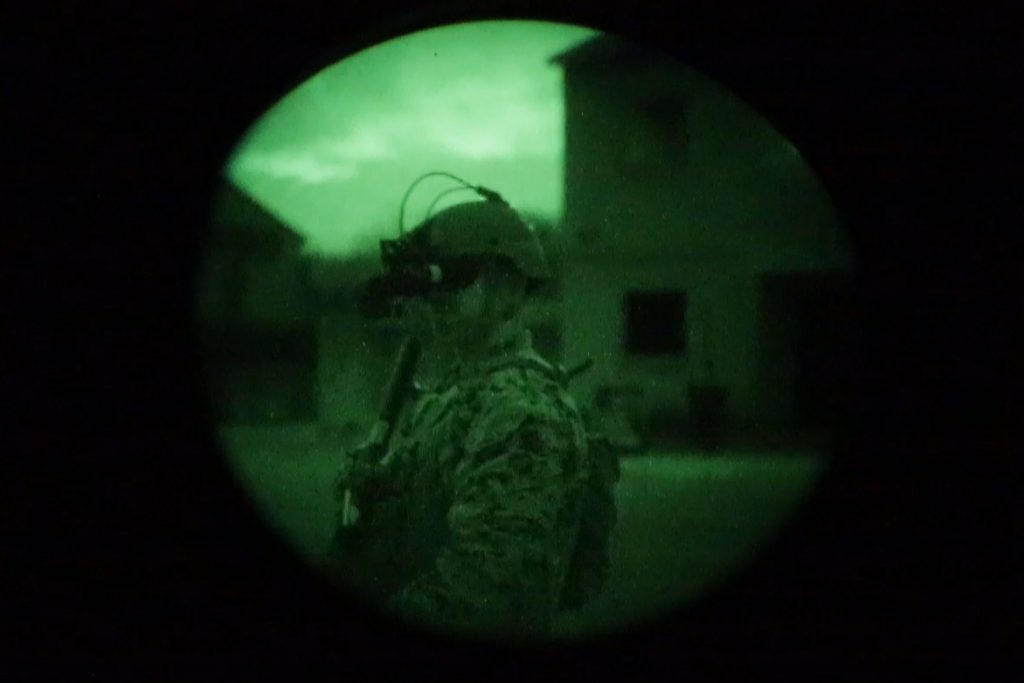 FEBRUARY 19, 2020 – In January, a group of Marines assessed next-generation night vision goggles in a realistic setting.

The Squad Binocular Night Vision Goggle is a lightweight night vision system comprising an image-intensifier binocular and enhanced clip-on thermal imager. The SBNVG is more capable than the AN/PVS-14—the legacy system that lacked the performance characteristics of the newer technology.

A helmet-mounted system, the SBNVG provides increased depth perception, improved clarity and a thermal-imaging capability to detect targets in extreme darkness or through battlefield obscurants. Marines can use the goggles to operate vehicles at night, move through dark buildings or tunnels, and engage targets after sunset.

In September, the Marine Corps awarded a contract to Elbit Systems of America—formerly Harris Corporation Night Vision Business—in Roanoke, Virginia, for the SBNVG system. During a Limited User Evaluation, MCSC facilitated the testing and assessment of the equipment to ensure its usability, reliability and effectiveness.

Scenario-based exercises
The SBNVG LUE comprised three separate evaluations, enabling Marines to test the system in realistic scenarios and environments similar to those on the battlefield.

During one exercise, a group of Marines from The Basic School aboard Marine Corps Base Quantico, Virginia, converged upon a Military Operations on Urbanized Terrain training facility to evaluate the SBNVG in low-light conditions.

Some participants donned chemical, biological, radiological, and nuclear protective equipment and helmets with the SBNVG attached. Others served as role players dressed in attire specific to that region of the world.

At sundown, Marines participated in a scenario during which they leveraged the SBNVG to scan multi-level buildings to secure a position, rescue friendlies or capture hostile targets. They searched for targets in all directions and at different heights, adjusted the focus as necessary and navigated pitch-black sewer tunnels with restricted height.

“This was my first time using binoculars as night vision goggles,” said Sgt. Chris Kozak, a Warfighting instructor at TBS. “The ability to see out of both eyes at night is beyond comparison with what we currently use.”

Marines also used the SBNVG in a target observation assessment to locate human targets at various ranges and levels of illumination. The weather enabled them to test the technology in fog to evaluate the system’s clarity, depth perception and thermal capability in such conditions.

“The thermal attachment allows us to see infrared heat, which will help us [identify targets], chest bombs and other objects,” said Kozak.

Importance of LUE
MCSC remains in contact with ESA. If any issues with the SBNVG exist, the program office will submit an Engineering Change Proposal allowing the company to modify the binoculars to meet performance requirements, said Stewart.

The LUE allowed Marines to discern any SBNVG mechanical limitations that would hinder real-world operations. The assessments enable MCSC to learn more about the SBNVG, gauge stakeholder opinion and address systematic issues. These events also help Marines familiarize themselves with the technology prior to fielding and ensure the Marine Corps remains a lethal force.

“It is important to test the SBNVG to see if it will be useful to us,” said Kozak. “Everyone here is an infantry Marine, so we know what we’re doing with the gear. We’re trying to provide our professional opinion of it.”
Stewart was encouraged by the success of the LUE. Marines provided effective, quality feedback that will help MCSC field the best possible version of the system, she said.

“The Marines talked about how they were able to maneuver in various environments with the SBNVG,” said Stewart. “That will ultimately help them on the battlefield.”