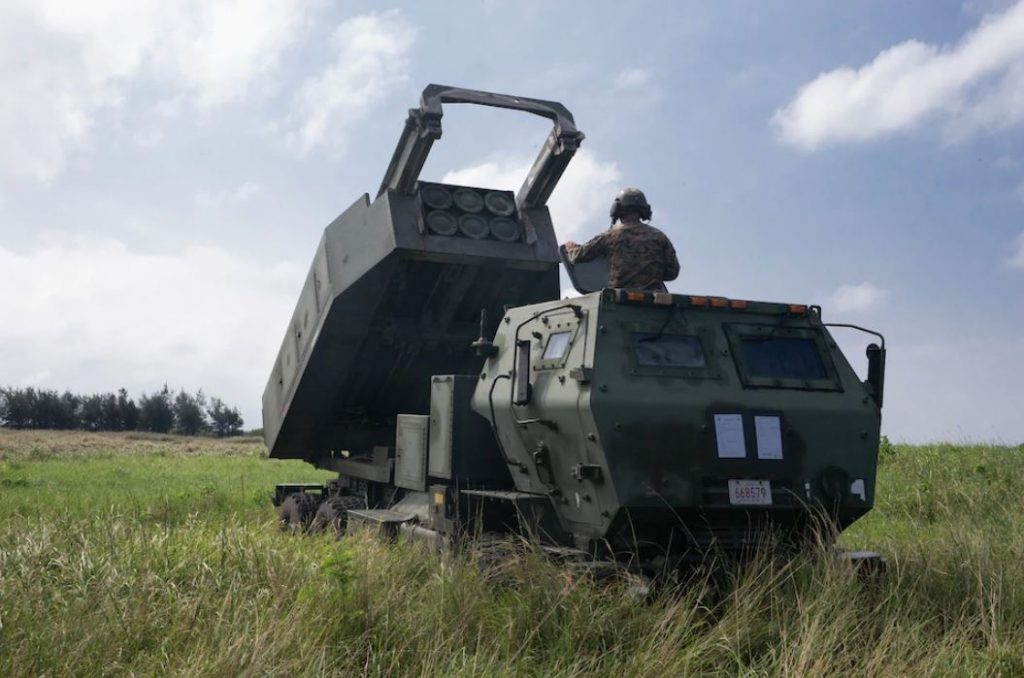 During this operation, elements of 12th Marine Artillery Regiment partnered with Marines from 3rd Reconnaissance Battalion and U.S. Air Force Special Operations Squadron to develop the unit’s ability to rapidly insert and employ a range of military capabilities from remote islands within littoral areas of the region. Jumping from Air Force C-130s, Marines and Sailors from 3rd Reconnaissance Battalion conducted a high altitude-low opening jump to secure an airfield on Ie Shima. Once secured, an Air Force C-130 loaded with a High Mobility Artillery Rocket System launcher landed and conducted a simulated precision-guided firing mission. Shortly after finding and destroying the simulated target, the HIMARS launcher reloaded and departed the island having completed its mission.

Simultaneously, Marines from Combat Logistics Regiment 3 and 9th Engineer Support Battalion, at nearby locations in Okinawa, established an expeditionary advanced logistics base and practiced the ability to resupply the forward-positioned element on Ie Shima. Their efforts included surface reinforcement and resupply of Ie Shima and tested the ability to move fuel ashore under expeditionary conditions. The exercise represented a step forward in demonstrating how III Marine Expeditionary Force units can leverage the unique capabilities of joint partners in rapidly dispersing to and operating from key maritime terrain, sustain these distributed positions, and quickly displace or withdraw as necessitated by the tactical situation.

“Today’s mission provided us an opportunity to work with the Air Force, and it’s also an opportunity for reconnaissance elements to integrate with the HIMARS launcher and its crew,” said Marine Capt. Robert O’Neill, a platoon commander with 3rd Reconnaissance Battalion, and Brookville, Maryland native. “The training we’re conducting is helping us enhance and expand our concepts of employment and increase our ability to conduct distributed maritime operations.”

The reconnaissance platoon, which boasts more than 700 jumps in a tactical environment among its current members, served as a key enabler for the operation by conducting a low-signature insertion and ensuring the security of the airfield. The employment of C-130s to quickly transport the HIMARS extends the range and efficiency with which the Marine Corps can employ missiles and rockets, increasing the lethality of the force.

“During HIMARS rapid infiltration missions, we routinely practice sending and receiving targeting data over a variety of over-the-horizon communication methods,” said Maj. John Huenefeld, operations officer for 12th Marine Regiment, originally from Oceanside, California. “By tapping into the network of sensors, we ensure the ability of 3rd Marine Division to fight now with long-range precision fires.”

“This opportunity is important because, if a real fight happens, we are going to use every available asset. The Air Force will work alongside the Marine Corps,” said Air Force Maj. Sean A. Sizemore, an air mobility liaison officer with Air Mobility Command, and Sacramento, California native. “The Air Force integrating with the Marine Corps ensures we remain highly interoperable. When a fight comes, we can get the Marines behind enemy lines or to where the fight is.”

“It’s very important, if we want to succeed in a naval contested environment, that we maintain a force that is highly lethal, resilient, redundant, and responsive,” said Colonel Michael Roach, commanding officer of 12th Marine Regiment.