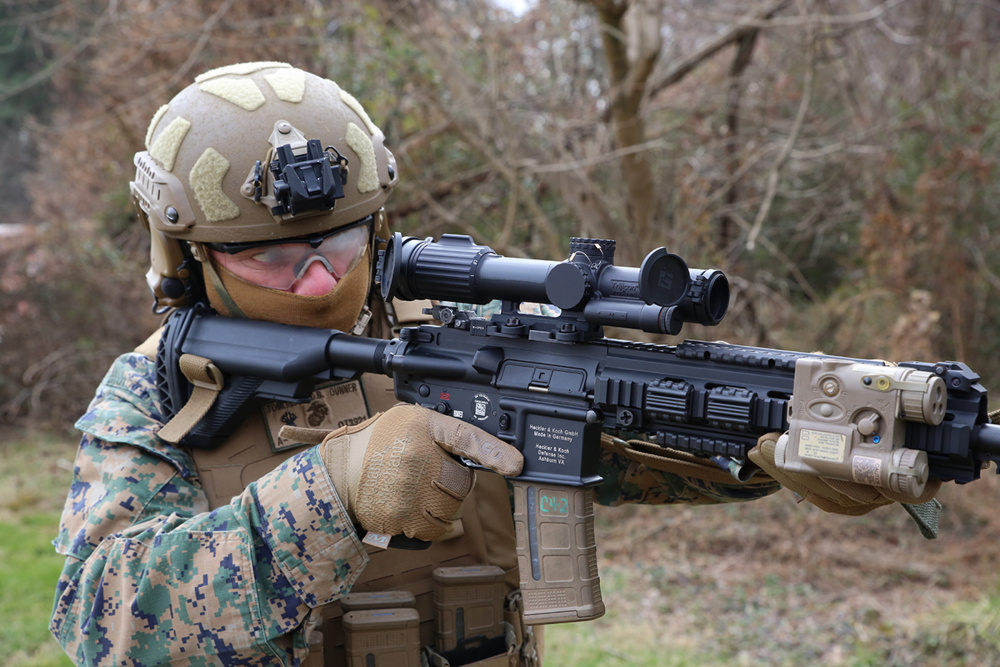 The SCO can be attached to the M4 and M4A1 Carbine as well as the M27 Infantry Automatic Rifle. It will supplement the attrition and replacement of the Rifle Combat Optic and the Squad Day Optic for each of those weapons for close-combat Marines.

SCO an improvement over RCO
The SCO enables Marines to identify targets from farther distances than the existing RCO system.

Roger Boughton, MCSC’s lead engineer for the SCO program, said the RCO has a fixed magnification, whereas the SCO provides a variable power. This means Marines can use the SCO to identify targets at both close and far distances, providing twice the visual range of the RCO.

“Having an optic that can reach out to longer distances will ultimately make the Marine a more lethal first-shot shooter,” said Boughton. “This means they can use less rounds to overwhelm an enemy.”

Maj. Kyle Padilla, MCSC’s optics team lead and an infantry officer, said the SCO is agnostic to the round and weapon system, which provides additional flexibility for Marines. This allows for movement to a different host weapon and accommodates the employment of the M855, M855A1 or future ammunition.

“It’s all about making an accurate decision,” said Padilla. “The SCO gives squad leaders or individual riflemen more time to make a decision to eliminate that threat if necessary.”

The system is also easy to assemble. The SCO includes a mount that prevents Marines from needing to carry tools to remove or exchange the optic, lightening the load for Marines.

“If you want to mount it onto the rail of the weapon, you don’t need a wrench to tighten anything,” said Boughton. “You just need your hands.”

‘A step in the right direction’
The SCO program moved rapidly from program designation to fielding in just 16 months. After awarding a contract, PM IW conducted various user assessments, including a simulated 10,000-round fire exercise, during production verification testing to confirm performance and resolve issues.

During these evaluations, Marines raved about the benefits of the SCO and its improvement over the existing system.

CWO4 Gerald Eggers, the infantry weapons officer at The Basic School, participated in the system’s fielding in January, aboard Marine Corps Base Quantico, Virginia. He commended the scope’s variable power magnification as well as its ability to be employed with different ammunition and weapons.

“Marines with M27s will greatly benefit with this scope,” said Eggers. “I certainly believe the SCO fielding is a step in the right direction.”

Dever said the fielding of the SCO puts an improved capability into Marines’ hands more quickly and enables them to carry out their missions more efficiently and effectively.

“The rapid acquisition and fielding of improved capabilities is vital to equipping the Marine Corps to operate inside actively contested maritime spaces in support of fleet operations,” said Dever.