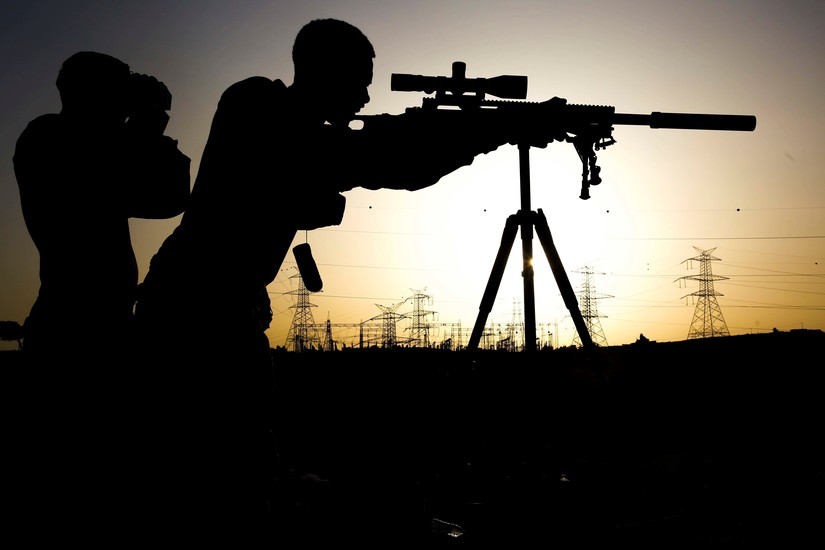 MAY 2, 2018, Amman, Jordan – A shot is fired, and a small cloud of dust kicks up. Seconds later, the ping of a bullet hitting a steel target 800 meters away is heard. “Hit,” says the spotter. The shooter pulls back the bolt of the suppressed M40A6 rifle and sends a new round into the chamber, ready to fire again.

This is one of hundreds of repetitions every time the scout sniper platoon with the 26th Marine Expeditionary Unit gets the chance to train. However, it is not only the scout snipers who take part in this precision cycle.

Professionally instructed gunmen, affectionately known as “PIGs,” make up the majority of the scout sniper platoon, working alongside the scout snipers, also known as hunters of gunmen, or “HOGs,” to accomplish the mission.

Made up of infantry Marines who have been carefully selected based on marksmanship and physical and mental strength, among other factors, the PIGs are a critical asset to the success of the scout sniper platoon.

“The PIGs and HOGs have similar jobs on paper; however, the HOGs have the advantage of the formal training that they get at the scout sniper school and all of the experience that comes with it,” said a Marine assigned to the scout sniper platoon whose name is being withheld for security reasons. “Once we go out as a platoon, though, everyone gets the same training and we all work side by side.”

Step Toward Certification
Marines in the scout sniper platoon proudly associate themselves as PIGs, as it is the step that all Marines go through to become certified as a scout sniper.

“Most Marines who are PIGs are selected through an indoctrination program where they are put through a series of mental and physical tests to see if they have what it takes,” the Marine said. “There is a lot of classroom time where they teach you the basics, and then they send you out to the field to test your skills as an infantryman, as well as throw you into new situations to see how you will react.”

While the vast majority of PIGs are infantry Marines, Navy corpsmen and communication Marines also are trained and fully integrated into the unit.

Much of the time as a PIG is spent trying to absorb the knowledge and experience of the HOGs.

Since the 26th MEU’s deployment has begun, the PIGs and HOGs have trained side by side in Israel, Djibouti and Jordan, refining their skills more and more with each exercise.

“We’ve had some great opportunities to train since we’ve been deployed, and the PIGS have been able to get better and better with each exercise,” the Marine said. “The PIGs are the future of the sniper community, and this training helps us make sure that we’re ready, should we get the opportunity to someday become a HOG.”