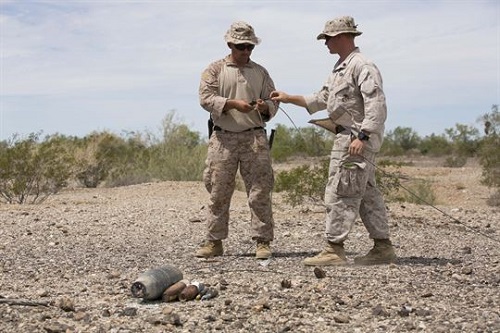 APRIL 14, 2016, CAMP HANSEN, Okinawa, Japan – During the wars in Iraq and Afghanistan, IEDs became a global symbol of terrorism. The threat created a warrior niche within the Marine Corps. Intelligent, hands-on Marines sought out the explosive ordnance disposal field, enticed by the opportunity to apply problem-solving skills to a high-pressure environment.

Fast-forward to today. Now that the Marine Corps has changed focus from counterinsurgency operations in the Middle East to expeditionary warfighting around the world, EOD Marines bred in counter-IED operations are refocusing on other high-octane activities, like inerting unexploded artillery rounds used in conventional warfare.

In the coming weeks, EOD Marines with 9th Engineer Support Battalion will head to South Korea, where they will have access to larger ranges that facilitate broad EOD training. The battalion, which falls under 3rd Marine Logistics Group, III Marine Expeditionary Force, will participate in Korea Explosive Ordnance Disposal Exercise 16, which is planned to be at least three times larger than last year’s iteration. Technicians with the Air Force, Army and Navy are also slated to participate.

“Last year, I believe it was about a platoon element, no more than 30 EOD techs that participated in it,” said Staff Sgt. Jarret Garibaldi, an EOD technician with 9th ESB. “This year, we’re looking at about three times that, so about 100 personnel involved.”

The battlefield is ever-changing. EODX 16 acts as a training opportunity for any changes EOD might potentially face.

“A lot of our senior EOD technicians have a lot of operational experience with combat operations and IED’s,” said Garibaldi, from Napa, Calif. “This gives us an opportunity to train up our junior technicians, as well as ourselves, in more basic functions of explosive ordnance disposal, like unexploded ordnance operations and conventional ordnance functions, operational area clearance of training and impact areas, and disassembly and exploitation of ordnance.”

This year’s exercise differs from any other EOD exercise in the past 30 years. With the addition of the new Remote Fuse Disassembly System, EOD technicians are able to increase their distance from unexploded ordnance.

“We’re pretty excited to break it out of the box and use it,” said Garibaldi. “With this system, we’re able to get much farther than the last. We can be totally outside a bunker with multiple barriers and obstructions between us. It provides us more safety.”

As EODX 16 kicks off this year, EOD Marines are primed and ready for whatever the enemy may have to throw at them.