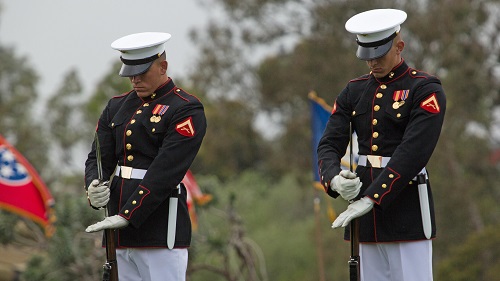 In the 18th and 19th centuries, the Marine Drum and Bugle Corps provided commanders a way to communicate commands to Marines on the battlefield. Today, the unit helps preserve part of a Marine Corps tradition.

Musicians from the Drum and Bugle Corps moved in unison and created various formations while performing musical selections. After the Drum and Bugle Corps finished their performance, the Silent Drill Platoon marched onto the parade deck aboard MCAS Miramar, occasionally twirling rifles and creating the illusion of rippling motion and echoing sounds during its performance.

According to Rocco, the Battle Color Detachment best represents Marine Corps discipline, at the same time entertaining an audience.

“It just makes me proud to see those young Marines perform,” said Rocco. “This is probably the first time most of the Marines have seen [them] perform, the Drum and Bugle Corps, the Silent Drill Platoon. [It’s] always a crowd pleaser, absolutely fantastic.”

The Drum and Bugle Corps performs in multiple venues across the United States. To find out about their schedule, visit www.drumcorps.marines.mil.