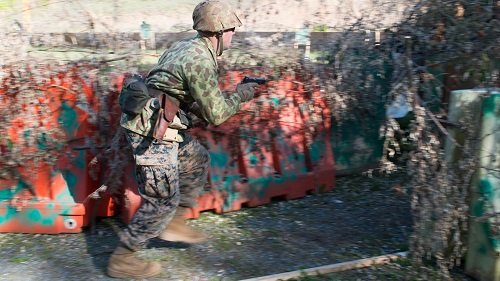 Although this particular competition was primarily designed to recruit Marines to come to the shooting team, one of the most important aspects of the competition is for competitors to become ambassadors in marksmanship knowledge and skills for their fellow Marines.

The top 10 percent of qualified Marines from the Far East, Pacific, West, and East divisions were eligible to compete.

The two-week competition is made up of three different events, where Marines competed both individually and as teams.

The second week was action oriented and included 12 courses, which encompassed all the marksmanship skills learned during the first week plus movement scenarios, more weapon systems, and a time element.

“We started the action portion to drill the fundamentals but in a more dynamic and combat related style,” said Gunnery Sgt. Nathan Stocking, Staff NCOIC of the Action Shooting Team: Marine Corps Shooting Team. You have to apply the same basic fundamentals of marksmanship but under compressed timelines like you would in combat.”

In this year’s action portion, competitors had no idea what the courses were or what they entailed until it was time for them to compete.

“The Marines love it and always ask for more of it,” said Stocking. “They force us to get more creative every year and develop even harder courses because they don’t get to see the same course of fire every time. It’s not something they can practice and get muscle-memory of.”

One of the new challenges added to the action portion of the competition this year was the staged weapons.

With staged weapons, competitors would start out with one weapon system and be forced to drop their weapons, pick up an unknown staged weapon and or switch to their side-arm weapon. They did all of this while being timed and having to perform other obstacles, such as executing a buddy drag.

“They come out here to compete to see who the best of the best is, learn some new tactics and techniques and take those back to their units so we can teach others how to become better warfighters,” said Staff Sgt. Stephen Ferguson, an instructor competitor with the Marine Corps Shooting Team.

The Marine Corps Shooting Team has set out to benefit the entire Marine Corps by providing Marine competitors the marksmanship knowledge that could ultimately assist them and their fellow Marines in combat scenarios, potentially being the difference between life and death.