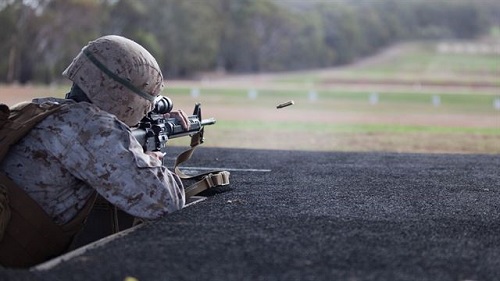 MAY 25, 2016, VICTORIA, Australia – Pounding footsteps from warriors could be heard from a distance as the Marine Corps Battle Colors swayed with a team of Marines with the Marine Corps Shooting Team as they charged through the Section Match May 17, 2016 at Puckapunyal Military Area, Victoria, Australia.

The event was part of the final week of Australian Army Skill at Arms Meeting 2016, which is an annual marksmanship competition that tests the skills of military competitive shooters from around the world on their marksmanship capabilities.

The match consisted of 3.4 kilometers of running, or roughly 2 miles, which was split into two runs of 2.4 and 1 kilometers. After the first run portion, the competitors shot in fire teams at targets at multiple targets at various distances on the firing range, and fired in foxholes at the moving target range after the second run, using M16A4 service rifles and M240B Machine guns.

The fire teams were optimized to have the faster runners on the team get to the range first to ensure the competitors make each deadline for the runs.

“I was one of the faster Marines so it was me and another Marine that traded off the machine gun for 2.4 kilometer in a 16-minute deadline and we had another kilometer run in a time of eight minutes,” said Lance Cpl. Michael Belt-Blevins, a competitor with the MCST. “I knew going in I would be one of the primary runners so I prepared myself for that by hydrating and stretching the night before.”

The competitors physically and mentally pushed each other as a team to ensure they accomplished the challenges together, according to Belt-Blevins.

“We did pretty well in the section match. We all made it well within the time limit,” said Belt-Blevins. “I know everyone was tired after running, but we all did very well as a team.”

Lt. Col. Steven Sutey, the commanding officer of 1st Battalion, 1st Marine Regiment, and Sgt. Mar. Stuart Glass, the sergeant major of 1st Bn., 1st Marines, visited the Marines at the competition, as some of their Marines were representing the MCST. During the section match, they ran with the MCST to motivate the competitors during the match.

“It was very motivating to have the CO and sergeant major running,” said Belt-Blevins. “To have both of those guys on either side of me motivating me I will never forget that.”

With his parent unit looking at Marine Rotational Force-Darwin on their horizons, Belt-Blevins hopes to bring the experience and knowledge he had during the section match and AASAM with him.

“I learned that I could run a lot faster with a flack and an M240 than I thought I could for a longer distance as well as machine gun tactics that I can take to the fleet,” said Belt-Blevins. “Being fatigued after shooting, sprinting and maintaining form to accurately shoot is something we can work on because it was hard for everyone. I think everyone can benefit from the endurance.” 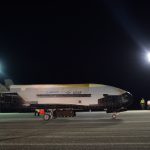