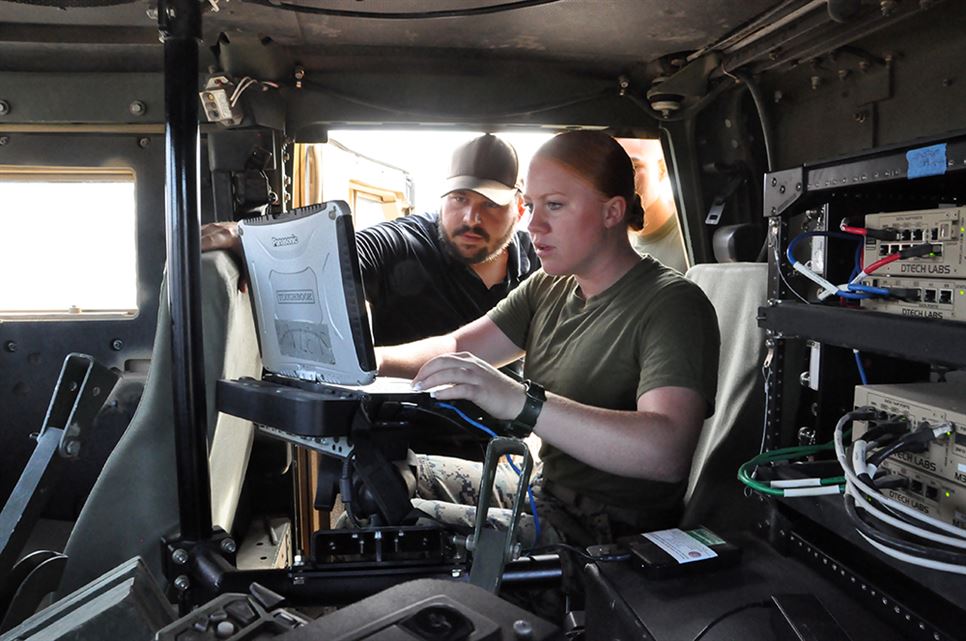 “The website gives Fleet Marines the opportunity to provide Marine Corps Systems Command program offices with insight into the equipment they use every day,” said Kenneth Hess, MCSC’s Manpower Personal Training lead for the Program Manager for Command and Control Systems, who spearheaded the project.

In addition to helping Marines, the website assists program offices in identifying, maturing and adopting key technical capabilities to advance and revolutionize C4ISR information and spectrum capabilities. The information gathered through the site can be leveraged to influence future system upgrades and enhancements.

How it works:
Equipment Feedback Portal fosters open communication between the maker and the user. The process of submitting information begins with Marines, who provide feedback ranging from technical difficulties to ideas for enhancing the gear.

MCSC’s Portfolio Manager for Command Element Systems receives and analyzes the feedback. Leveraging existing processes between the fleet and acquisition and requirements communities, PfM CES will make recommendations to Combat Development and Integration for potential updates to systems.

Timelines for action vary depending on the complexity of the idea, but the Marine who submitted the feedback will be updated throughout the process.

“When Marines submit a message, they will receive an automatic response explaining the next steps in the process and that the program office will be in touch if we need more information,” said Hess.

While Equipment Feedback Portal is currently limited to CES equipment, Hess said MCSC may expand the site’s options in the future to include technologies within other portfolios and programs. This would allow more Marines to offer critical feedback on gear.

“The success of the pilot will allow us to judge whether or not to open the site across all of SYSCOM.”

While there, Hess learned that a young Marine discovered a way to connect a network cable from the NOTM server to the flight deck of a KC-130 aircraft, giving the flight crew internet access, including weather updates. It was a capability the crew did not have previously.

However, the unidentified Marine’s NOTM innovation did not become a widespread utility because no mechanism for sharing the idea existed for MCSC-fielded equipment. Hess felt the command should launch a site that encouraged creative ideas for enhancing system capabilities.

“As we continue to equip the warfighter, we must listen intently to the warfighter.”
Sgt. Maj. Robin Fortner, MCSC command sergeant major

“That was the moment that led to this idea,” said Hess. “We should be taking good ideas from Marines who use these systems and implementing them across the Marine Corps.”

Each day, Marines are employing equipment in ways beyond the intended mission. They are discovering new capabilities not realized when CD&I developed the requirement. Because Marines continue to push the capabilities of equipment, the need for a proactive program that solicits their feedback is paramount, said Hess.

The MCSC-run website will enable Marines to provide ideas that could be implemented throughout the Marine Corps.

“In many cases, we’re not capturing good ideas from Marines before they leave the service,” said Hess. “This is a mechanism to capture those ideas.”

MCTSSA involvement:
In 2019, Hess travelled to the Marine Corps Tactical Systems Support Activity aboard Marine Corps Base Camp Pendleton, California, to support a NET exercise for Tactical Service Oriented Architecture. There, he shared his idea for creating a platform designed to solicit Marine feedback with Maj. Lucas Burke, the director of MCTSSA’s Warfighter Support Division.

“He mentioned his idea of creating a portal for user input,” said Burke. “I told him MCTSSA could help him host that on our site, because any Marine with a CAC can get to our site.”

MCTSSA’s WSD is responsible for hosting, developing and supporting this initiative through their current self-help website. Their CAC-enabled platform provides 24/7 support to Marines using more than 65 tactical systems.

“The MCTSSA Support Center is the single point-of-contact for FMF issues with MARCORSYSCOM C4I equipment,” said Burke. “It provides a platform for the entire Marine Corps—from the MEFs to Training Command—to reach back to MARCORSYSCOM directly and engage with system analysts, engineers, logisticians and program offices in a highly efficient manner to solve their problems.”

“With subject matter experts and professional interoperability experts contributing to the site daily, warfighters throughout the DOD can access and solve their issues, without the need to call or chat,” said Bobst. “We felt this was the ideal location to hang a submission form for this equipment feedback project.”

Fortner supported MCTSSA’s efforts to communicate with the Operating Forces prior to Fleet Feedback Portal. She and other senior officials have discussed at length how MCTSSA’s initial efforts should expand to more Programs of Record.

“I was very happy to hear about the equipment feedback project from PfM CES,” said Fortner. “This is essential to speed and relevancy.”

Fortner understands the value of Marine feedback and how their opinions can benefit the Marine Corps. Since she assumed her role with MCSC in 2018, Fortner has emphasized the need for steady communication between the program offices and Marines to enhance and sustain equipment.

Equipment Feedback Portal supports this vision.
“As we continue to equip the warfighter, we must listen intently to the warfighter,” said Fortner. “I hope this program can bridge some of those communication gaps and that the feedback provided can help increase the capability of the equipment. We owe it to the warfighter.”

Marines can submit feedback by visiting Equipment Feedback Portal at https://mceits.usmc.mil/sites/MCTSSA/innovation/Pages/Equipment-Feedback-Portal.aspx. The website requires a CAC and is optimized for use with Microsoft Edge and Google Chrome.